Alcuin and Cynewulf: the art and craft of Anglo-Saxon verse 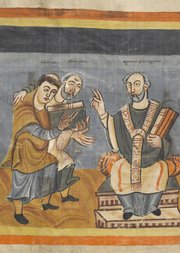 Abstract: The essentially bilingual nature of Anglo-Saxon poetry is explored through the verse of two of the most prolific poets from the period, namely Alcuin and Cynewulf, composing primarily in Latin and Old English, respectively, but each reflecting knowledge and appreciation of verse in both languages. Both Alcuin and Cynewulf are shown to have consciously copied the works of their predecessors, and both in turn had their own verse evidently echoed by contemporary and later poets in both Anglo-Latin and Old English, so much so that they seem to have been the centres of closely identifiable ‘schools’ of verse, active at around the same period, within a decade or two either side of the year 800, and sharing a similar background, attitude, and training. An Appendix considers the authorship and identity of Cynewulf, and suggests that, like Alcuin, he too may be best situated at the interface of orality and literacy in contemporary Northumbria.