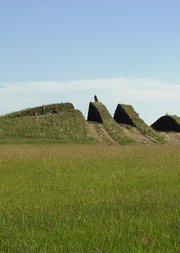 Full text of article posted to Journal of the British Academy, volume 5, pp. 331-355

Abstract: This article is dedicated to the phenomena called ‘kurgans’, the monumental burial mounds of riding nomads of the Scythian period. Kurgans were first investigated in southern Ukraine and southern Russia, the core area of Scythian tribes according to Herodotus. East of the Ural Mountains, however, the kurgans are less known, as only very few of these monumental burial mounds have been decently excavated. In the last 20 years, however, several Russian–German projects under the author’s leadership have been dedicated to a better understanding of monumental kurgans in the steppe belt of Eurasia—Kazakhstan, southern Siberia, the Ural region and the northern Caucasus—contributing an enormous amount of new information about the complexity of these burial monuments. It has become clear that these elite burial monuments are not only important for rich funerary goods but also for the complex structure of the kurgans themselves, which only can be fully understood if they are considered as rituals which became architecture.