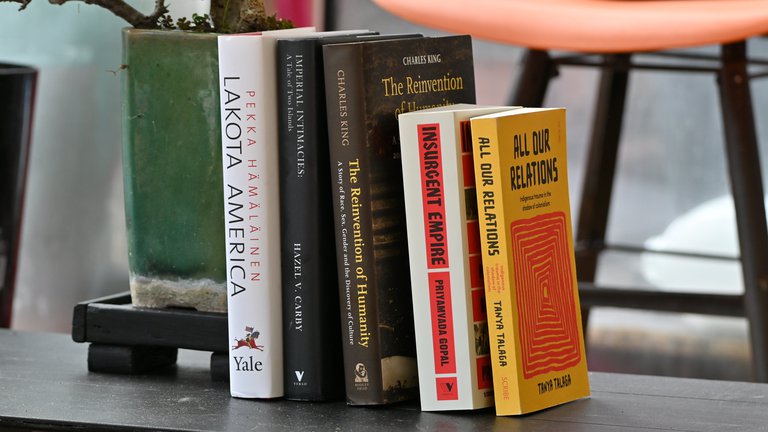 This wide-ranging and diverse shortlist demonstrates the power of non-fiction, and of the humanities and social sciences, to examine the critical issues of our time through a global lens…As we live through extraordinary times, writing such as this helps us to understand the complexities and wonders of our world.

The international book prize, worth £25,000, rewards and celebrates the best works of non-fiction that have contributed to global cultural understanding, throwing new light on the interconnections and divisions shaping cultural identity worldwide.

This year’s shortlist, selected from over 100 submissions – a record number for the prize – introduces readers to some of the most important global issues of the day as leading experts delve deeply into untold stories around Empire, colonialism, indigenous peoples and the pioneering anthropologists who shaped our interpretation of what it means to be human.

The five books on the 2020 shortlist, alphabetically by author surname, are:

In Imperial Intimacies: A Tale of Two Islands, Hazel V. Carby summons her memories of growing up in post-war England and Wales, as the daughter of a Jamaican father and Welsh mother, to trace the history of her family as it was shaped under the British Empire. For three decades Carby taught at Yale University as the Charles C. and Dorothea S. Dilley Professor of African American Studies and Professor of American Studies.

Continuing the theme of Empire, Professor Priyamvada Gopal, University Reader in Anglophone and Related Literatures in the Faculty of English and Fellow of Churchill College, Cambridge, is shortlisted for Insurgent Empire – Anticolonial Resistance and British Dissent. In this important study of anti-colonialism, Gopal makes the point that the imperial project was fiercely resisted outside Britain and in that resistance emerged the ideas of what it means to be free.

With Lakota America: A New History of Indigenous Power, Pekka Hämäläinen, Rhodes Professor of American History and Fellow of St. Catherine's College at the University of Oxford, delivers a highly original and long-overdue history of the Lakotas – the tribe of Sitting Bull and Crazy Horse – and their profound role in shaping America’s colonial and indigenous histories. The book argues that without the Lakotas we cannot truly understand early American history and European colonialism in North America.

Indigenous history and the impact of colonisation is further explored by the award-winning Canadian journalist Tanya Talaga, who is shortlisted for All Our Relations: Indigenous Trauma in the Shadow of Colonialism. In this sharply presented analysis she explores intergenerational trauma, the alarming rise of youth suicide among Indigenous people in Canada and the enduring impact of separation of First Nation peoples from their land.

Meanwhile, in The Reinvention of Humanity: A Story of Race, Sex, Gender and the Discovery of Culture, Charles King, Professor of International Affairs and Government at Georgetown University, explores how a group of pioneering cultural anthropologists – mostly women – shaped our interpretation of the modern world.

Chair of this year’s jury Professor Patrick Wright FBA, Emeritus Professor of Literature and History at King’s College and Fellow of the British Academy, comments:

“This year, our jury has selected a shortlist of five distinguished books exploring issues of urgent global significance. The range is various as it should be, but this year's titles converge in their concern with the legacies of Empire and the things that have been – and still need to be – done to create a genuinely post imperial understanding of how different cultures have interacted, and might in future interact, with one another”.

“This wide-ranging and diverse shortlist demonstrates the power of non-fiction, and of the humanities and social sciences, to examine the critical issues of our time through a global lens – from justice and liberation to notions of identity and belonging. As we live through extraordinary times, writing such as this helps us to understand the complexities and wonders of our world.”

The five Nayef Al-Rodhan Prize 2020 shortlisted writers will be brought together from around the world for a special live online event, in partnership with the London Review Bookshop, on Thursday 1 October. The event will be chaired by Ritula Shah, presenter of BBC Radio 4’s The World Tonight.

The shortlisted writers will also be in conversation in a special edition of Free Thinking on Tuesday 29 September and will be available worldwide as the BBC Arts & Ideas podcast.

The winner will be announced on Tuesday 27 October. The winner in 2019 was Toby Green for A Fistful of Shells – West Africa from the Rise of the Slave Trade to the Age of Revolution and other previous winners include Kapka Kassabova, Neil MacGregor and Karen Armstrong.

On 1 October from 6–7pm, meet the authors shortlisted for the 2020 Nayef Al-Rodhan Prize for Global Cultural Understanding at this special British Academy and LRB event, hosted on our YouTube channel. Ritula Shah will be joined by the five shortlisted authors for an exploration of cultural identity, why it matters and how we can move forward in these deeply problematic times.

Read extracts from the shortlisted books

'The Reinvention of Humanity'

'The Reinvention of Humanity'