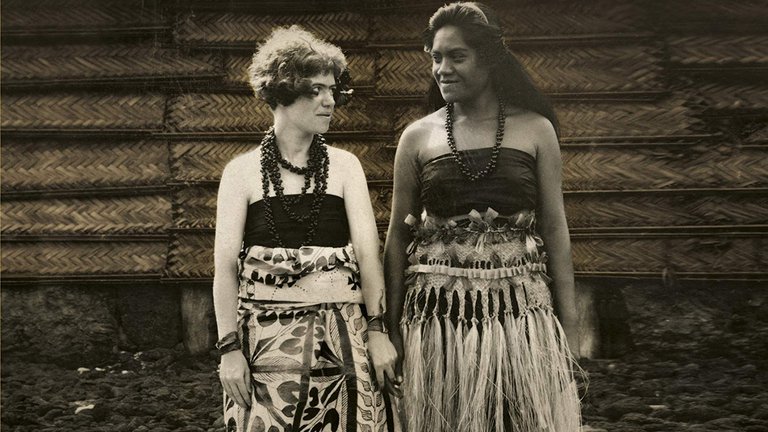 This is part of our 2020 Nayef Al-Rodhan Prize series celebrating the five non-fiction books shortlisted for promoting global cultural understanding. In this extract from, ‘The Reinvention of Humanity', Charles King looks back at Margaret Mead's early work as part of a pioneering group of anthropologists.

On the last day of August 1925, the triple-deck steamship Sonoma, midway through its regular run from San Francisco to Sydney, slipped into a harbour formed by an extinct volcano. The island of Tutuila had been scorched by drought, but the hillsides were still a tangle of avocado trees and blooming ginger. Black cliffs loomed over a white sandy beach. Behind a line of spindly palms lay a cluster of open-sided thatched houses, the local building style on the string of Pacific islands known as American Samoa.

On board Sonoma was a 23 year old Pennsylvanian, slight but square-built, unable to swim, given to conjunctivitis, with a broken ankle and a chronic ailment that sometimes rendered her right arm useless. She had left behind a husband in New York and a boyfriend in Chicago, and had spent the transcontinental train ride in the arms of a woman. In her steamer trunk she carried reporters’ notebooks, a typewriter, evening dresses, and a photograph of an aging, wild-haired man she called Papa Franz, his face sliced by sabre cuts and melted from the nerve damage of a botched surgery. He was the reason for Margaret Mead’s journey.

Mead had recently written her doctoral dissertation under his direction. She had been one of the first women to complete the demanding course of study in Columbia University’s department of anthropology. So far her writing had drawn more from the library stacks than from real life. But Papa Franz – as Professor Franz Boas, the department chair, was known to his students – had urged her to get out into the field, to find someplace where she could make her mark as an anthropologist. With the right planning and some luck, her research could become “the first serious attempt to enter into the mental attitude of a group in a primitive society,” he would write to her a few months later. “I believe that your success would mark a beginning of a new era of methodological investigation of native tribes.” Now, as she looked out over the guardrails, her heart sank. Gray cruisers, destroyers, and support vessels clogged the harbour.

The surface of the water was an oily rainbow. American Samoa and its harbour on Tutuila – Pago Pago – had been controlled by the United States since the 1890s. Only three years before Mead arrived, the navy had shifted most of its seagoing vessels from the Atlantic to the Pacific, a strategic reorientation that took account of America’s growing interests in Asia. The islands quickly became a coaling station and repair centre for the reorganised fleet – which, as it happened, was steaming into Pago Pago on exactly the same day as Mead. It was the largest naval deployment since Theodore Roosevelt had sent the Great White Fleet around the world as a display of American sea power.

Airplanes screamed overhead. Below, a dozen Fords sputtered along a narrow concrete road. In the malae, the open-air common at the centre of Pago Pago, Samoans had laid out an impromptu bazaar of wooden bowls, bead necklaces, woven baskets, grass skirts, and toy outrigger canoes. Families were spread around the green, enjoying an early lunch. “The band of some ship is constantly playing ragtime,” Mead complained. This was no way to study primitive tribes. She vowed to get as far away from Pago Pago as possible.

Her research topic had been suggested by Papa Franz. Was the transition from childhood to adulthood, with young women and men rebelling against their stultifying parents, the product of a purely biological change, the onset of puberty? Or was adolescence a thing simply because a particular society decided to treat it as such? To find out, Mead spent the next several months trekking across mountains, decamping to remote villages, drawing up life histories of local children and teenagers, and quizzing adults about their most intimate experiences of love and sex.

It didn’t take her long to conclude that Samoa seemed to have few rebellious adolescents. But that was largely because there was little for them to rebel against. Sexual norms were fluid. Virginity was celebrated in theory but underprized in practice. Strict fidelity in relationships was foreign. Samoan ways, Mead reported, were not so much primitive and backward as intensely modern. Samoans already seemed comfortable with many of the values of her own generation: the American youth of the 1920s who were going to petting parties, downing bootleg gin, and dancing the Charleston. Mead’s goal became to work out how Samoans managed to avoid the slammed doors, the Boys Town delinquents, and the fear of civilisational collapse that obsessed commentators back home. How had they produced teenagers without the typically American angst?

Or had they really? “And oh how sick I am of talking sex, sex, sex,” she wrote to her closest friend, Ruth Benedict, a few months into her stay. She had filled entire notebooks, written out index cards, and typed up reams of field reports, sending them by canoe through the breakers and over the reef to the mail boat. She watched with her stomach in knots, afraid that the outrigger would capsize and destroy the only reason she had for being on the far side of the world – or for that matter, the only evidence she had of something that could vaguely be called a career. “I’ve got lots of nice significant facts,” she wrote, the sarcasm wafting off the page, but she doubted that they added up to much. “I’m feeling perfectly pathological about my time, my thoughts.. . . I’m going to get a job giving change in the subway when I get home.”

She could not have known it at the time, but there among the welcoming feasts and the reef fishing, on humid afternoons and in the lashing winds of a tropical storm, Mead was in the middle of a revolution. It had begun with a set of vexing questions at the heart of philosophy, religion, and the human sciences: What are the natural divisions of human society? Is morality universal? How should we treat people whose beliefs and habits are different from our own? It would end with a root-and-branch reconsideration of what it means to be social animals and the surrender of an easy confidence in the superiority of our own civilisation. At stake were the consequences of an astonishing discovery: that our distant ancestors, at some point in their evolution, invented a thing we call culture.

© Charles King from The Reinvention of Humanity: A story of Race, Sex, Gender and the Discovery of Culture, Penguin Book, Bodley Head 2019

The Reinvention of Humanity was shortlisted for the 2020 Al-Rodhan Prize.

Charles King is Professor of International Affairs and Government at Georgetown University. His many books include Midnight at the Pera Palace: The Birth of Modern Istanbul, a 2014 New York Times Book Review Notable Book, and Odessa: Genius and Death in a City of Dreams, winner of a National Jewish Book Award in 2011. His writing has appeared in the TLS, Literary Review, New York Times, Washington Post, Foreign Affairs, and other publications. He lives in Washington, DC, with his wife, the writer and anthropologist Maggie Paxson.