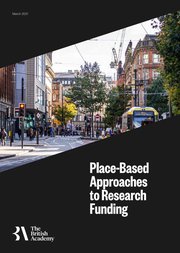 The British Academy organised two roundtables to help inform the UK R&D Place Strategy, which is currently being drafted by the Department for Business, Energy and Industrial Strategy. The first roundtable took place on 3 September 2020, chaired by Professor Julia Black FBA and focussed on the potential future role of place in SHAPE (Social Sciences, Humanities and Arts for People and the Economy) knowledge exchange and its funding mechanisms. The second roundtable, on 9 September 2020, was chaired by Professor Simon Swain FBA and discussed considerations for governance of placebased approaches to R&D funding. Roundtable participants were drawn from academia, funding bodies, business and local government and the discussions were conducted under the Chatham House Rule. British Academy staff have drafted this summary of the main points surfaced by participants during the two events.