10-Minute Talks: Saladin and the Crusades – medieval and modern perspectives 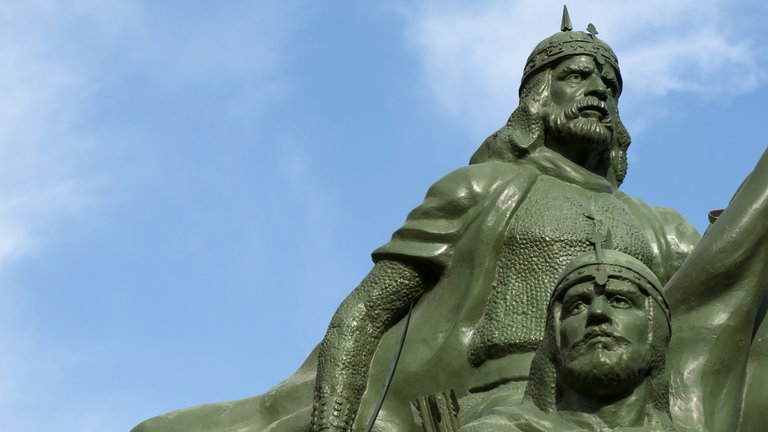 Professor Carole Hillenbrand FBA discusses the interest in discovering more about the phenomenon of the Crusades in the Middle Ages from Islamic perspectives.

For a long time now, I've studied the history of the Crusades from Muslim viewpoints and I have written many articles and a large, illustrated book on this subject called The Crusades: Islamic Perspectives.

The Crusades are part of the familiar furniture of our past. But perhaps it’s time we looked at this, not from our own western viewpoint, which idealises the Crusades as a holy war, which indeed it was to some degree. But what did it look like from the victims' point of view? For there is no doubt that the Muslims were the victims. They were not the aggressors.

They were minding their own business in a land which had been theirs for almost half a millennium.

Now all of a sudden, here were these westerners, coming out of the blue by land and sea. And they were so alien. They had red or blond hair and blue eyes. They stood out like a sore thumb. They dressed outlandishly. Their armour and their horses were nothing like their local equivalents. And they spoke strange languages which nobody could understand. It was as if they were men from Mars. They were nothing like the Christians with whom the Muslims had lived peacefully ever since the Arabs came like a whirlwind out of the desert, preaching their new faith of Islam, in the early seventh century. And let's not kid ourselves – these western invaders were intent on a land grab. They were colonists and the Arabs were not used to being colonised.

What actually happened? In 1099, the Crusaders captured Jerusalem amidst an orgy of bloodshed that the Muslims never forgot. These alien Europeans then set about making this city the most heavily Christianised square mile on the planet. This was a catastrophe for the locals. They were horrified to see Islamic sacred space polluted, as their most venerated places of worship, the Dome of the Rock and the Aqsa mosque, were taken over for Christian services. And, of course, Jerusalem was the third holiest city in the world for Muslims, after Mecca and Medina, and historically it was the first ever direction of Muslim prayer. So, this was a body blow for Muslims far and wide.

Next, like any group of determined colonists, the Crusaders parcelled out the land for themselves. However, quite soon thereafter the Crusaders also attempted to establish a working relationship with the Muslims, their foes. It wasn't exactly an entente cordiale. But, after all, the Crusaders and the Muslims in the Holy Land and Syria were obliged to live cheek-by-jowl and, especially in the first 50 years, they were often at peace, rather than war. They traded with each other; Crusaders sometimes inter-married with Muslims. They copied Muslim customs in housing, clothing, even abstaining from eating pork and beginning to veil their women. The famous 12th-century Muslim diarist, Usama ibn Munqidh, wrote many amusing anecdotes about the improper behaviour of the Crusaders in the bathhouses of the Holy Land and Syria and he wrote about the lack of proper medical knowledge on the part of Crusader doctors.

But, despite Muslim-Crusader co-existence for a while, the Crusaders, in the four states that they'd established in the near east, were fighting a losing battle. Their numbers were too few, their supply lines were far too long and they were dogged by internal rivalries, which they could ill afford. Above all, the Muslims began to get organised and to recharge a key aspect of their religious ideology, namely, spiritual and corporate jihad. That inspired them. Under its banner they united and in 1187 Saladin took back Jerusalem amidst universal Muslim rejoicing. Now the writing was on the wall for the Crusaders. The 13th century saw them steadily driven out of their strongholds and it was only a matter of time before their last lonely outpost in the near east, the Mediterranean port of Acre, fell in 1291.

So much for the events themselves. What about their legacy? Why on earth should we be interested in these distant battles in our own century? There are some strange aspects to the phenomenon of the Crusades. For a start, how is it that Saladin, a minor warlord operating on the narrow canvas of Syria, Egypt and the Holy Land in the 12th century, should be regarded outside the Islamic world as the best-known Muslim after the Prophet Muhammad? What about the legacy of the Crusades both in Europe and also in the Muslim world in modern times?

The evolution of the Saladin legend in Europe is a remarkable story. His glowing reputation there is all the more noteworthy since he was certainly the most feared opponent of the Crusaders. After the Third Crusade, it was not long before Saladin’s reputation entered European romance and legend. Within a single generation, he is depicted in 13th-century European texts as a magnanimous and noble leader, a pivotal figure, a paradigm of chivalry. This tradition continued right through the later Middle Ages into modern times. Saladin, the victorious Muslim leader who re-conquered Jerusalem for Islam, was praised, believe it or not, for his generosity and magnanimity by none other than Dante, Gibbon and Sir Walter Scott.

In the 19th century, the idea of parallels between the medieval Crusades and recent, unwelcome European interference in the Muslim world crystallised in the Arab consciousness. These parallels appeared increasingly apt as the century progressed and the waves of European imperialism and colonialism swept through the Middle East.

In the 20th century the Arab world "rediscovered" the Crusades, viewing them as symbols for current political problems. The concept of the Crusades became widespread and deep-rooted in modern Islamic political ideologies. Ayatollah Khomeini in Iran spoke of the need to fight "the last stage of the historical Crusades". Other Middle Eastern rulers like President Sadat of Egypt and Saddam Hussein of Iraq aspired to be regarded by their subjects as the second Saladin. President Assad of Syria erected a bronze statue of Saladin close to his palace in Damascus. Later on, Osama bin Laden’s most hostile rants on the internet were directed against the USA and its allies. He called these "global crusaders", whereas President George W. Bush’s statement at the tragic time of 9/11 deeply upset the Muslim world when he uttered the words: "this is a crusade, this war on terrorism".

Let me sum up. While the word "crusade" is still bandied about today with little heed to the historical context in which it first appeared, it is abundantly clear at both a scholarly and more popular level that there is now a continuing and genuine interest in discovering more about the phenomenon of the Crusades in the Middle Ages and its legacy over the centuries. May I stress here once again that it is fortunate that in recent years, there has been more careful attention paid by Muslims and non-Muslims to Islamic perspectives on the Crusades. Thank you.