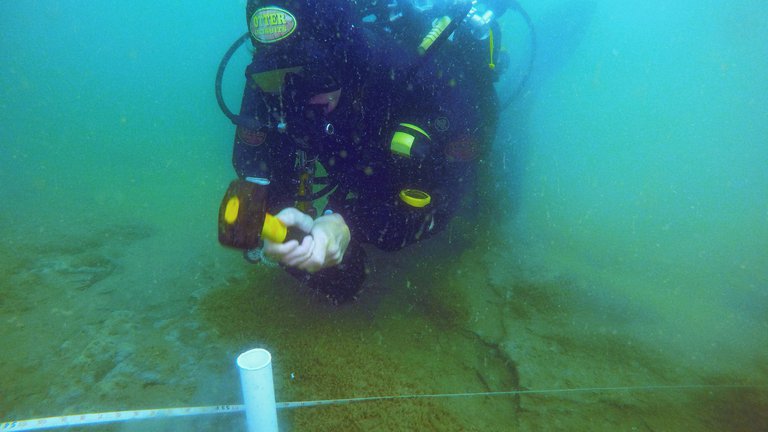 Pleistocene remains on the coast of Norfolk

In 1877, a powerful storm brought large slabs of freshwater clay-ironstone onto the foreshore at Happisburgh, a village on the coast of Norfolk. For many years, people had been finding the bones of long-extinct animals, such as mammoths, on the beaches and encased within the cliff deposits, but these blocks were something new. They contained impressions of the leaves of trees, seeds, shells and the bones of freshwater fish and were, it seemed, eroding from the seabed, providing evidence of now-submerged terrestrial landscapes that, at that time (~1.5 – 0.5 million years ago), connected Britain to the continent. So fascinating were these blocks that Clement Reid, a natural scientist at the time, went searching for them with a grappling iron from a Geological Survey boat. Although they were unsuccessful in bringing anything to the surface, they located a rocky, iron-rich outcrop, which he published in his 1890 book on The Pliocene Deposits of Britain.

The presence of these blocks, since found containing bones of Pleistocene animals, and the reports of a rich collection of animal bones from the foreshore and cliffs, led to a lot of research on these deposits. However, the lack of archaeology and the difficulties of working underwater meant that from the early 1900s, they were largely overlooked.

Over the past 15 years, everything has changed: exciting archaeological discoveries by the Pathways to Ancient Britain group at Happisburgh, on the coast of Norfolk, UK, have begun to re-write the story of early human occupation in northern Europe. These sites have shown that our ancestors were surviving harsh winter temperatures nearly one million years ago; hundreds of thousands of years earlier than previously thought. Given the difficulties of surviving in these conditions, something that I am interested in is what they were doing here – how they were surviving and whether something about the contemporary environments was facilitating this. One aspect to answering this question lies in the aforementioned terrestrial parts of these landscapes that are now submerged. Understanding the use of these lower-lying areas by our early ancestors could help to answer questions about how and why they were here and the behaviour associated with different environments, as well as, possibly, increase the known archaeological record considerably. However, with modern sea levels submerging these landscapes, our ability to do this is seriously inhibited.

How do we access these landscapes now that they are submerged? Recent years have seen a surge in people collecting Pleistocene animal bones and, more recently, stone tools from the beaches around Happisburgh, many of which have accurate GPS information and have that same concreted material adhering to them. In addition to the information from Reid’s 1890 publication, recent analysis of these finds points to two things: first, that some of these are deriving from the known foreshore deposits associated with the archaeological sites; but second, that a significant number of these appear to be eroding out and washing in from the deposits now underwater. Using the patterning of these finds, previous diving for this research has located underwater deposits, which we have begun to analyse for things like pollen, microfauna (things like vole teeth, which tell us a lot about the age of deposits) and ostracods. These will not just tell us what life was like when they were laid down, but are helping us to begin to link the submerged deposits with those on the foreshore, providing a wider picture of the landscape and its occupation. This is being aided by sub-seabed imaging, which is showing the extent of the submerged deposits in areas where sand waves are obscuring our view as divers. In addition, stone tools and Pleistocene animal bones have been found underwater, all of which, so far, have been loose on the seabed.

However, two fragments of rolled and barnacle-encrusted mammoth forelimb, found on separate dives in 2019, fit together perfectly, indicating that despite spending a while moving along the seabed, these bones are moving in a uniform way. This implies that, if we can unpick these movement patterns, we should be able to trace them to their source.

In our research, we continue to use seabed imaging to search specific locations for outcropping archaeology, as well as spending time (water visibility permitting) searching for the original locations of the archaeology that is washing up. Although a bit like a needle in a haystack, the methods used to come up with the search areas have really helped us to narrow it down. We are ultimately hopeful of not just locating and investigating these submerged archaeological signatures, but of gaining a clearer understanding of the wider landscapes of occupation that facilitated survival at such early dates.

Dr Rachel Bynoe (@rachelbynoe) is a Lecturer in Archaeology at the University of Southampton. She was awarded a British Academy Small Research Grant in 2019, with support from the Honor Frost Foundation.