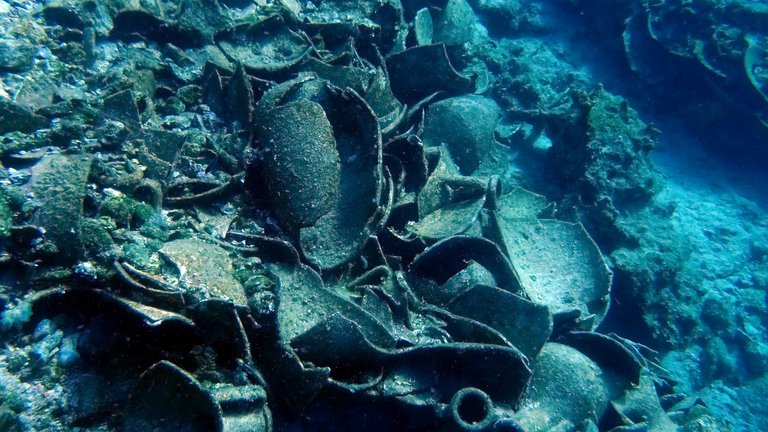 The islands of Levitha, Kinaros and Maura lie at the intersection of main sailing routes of the Aegean, connecting Asia Minor with the Cyclades and mainland Greece. Literary sources indicate that they are also located at the intersection of historically important sailing routes of the Aegean and local fishermen and sponge-divers have given information about shipwrecks in this area. Despite this, no underwater survey had ever been conducted to trace these maritime routes. Our research project focused on locating the shipwrecks around the island of Levitha, so as to document and further investigate these routes. The arrangement of the four islands creates an arch that spans the distance between the island of Leros in the Dodecanese and the island of Amorgos in the Cyclades. Each one of the islands forms a barrier towards the north, while their southern sides are fairly protected from the northern winds that usually blow during the sailing season.

The acropolis was built using large blocks of oolite limestones extracted in situ. It takes advantage of the particular geomorphological formation of the site creating a steep rocky slope, which guaranteed its complete inaccessibility from the southern side. Watchtowers, such as the one at the southeast edge of the island, are common in the Aegean and are generally related to fortifications built during the early Hellenistic period, in relation to the changing landscapes of power of the eastern Mediterranean in the early Hellenistic period.

The island is mentioned as Levinthos and Lebinthos by Strabo and Pliny the Elder respectively in their accounts of the islands of the central Aegean (Strabo, Geography, 10.5.12; Pliny the Elder, Natural History, 4.12.69-70), while Ovid includes Lebinthos in the mythological topography of the flight of Icarus (Ovid, Metamorphoses, 8.220-225).

The Stadiasmus Maris Magni (281) mentions Levinthos in an alternative sailing route, if one wants “to sail through the islands” when going from Kos and Leros to Amorgos.

No further information is given about the island, but these citations underscore the island’s role as an important geographical point of reference for sailing and coastal tramping.

In the early modern period, cartographers mapped the island as Levita or Levata, together with Kinaros, Chinera or Zinara, and documented the large mooring berth on the island's southern shores, which points to the role that Levitha played in shipping and navigation in this period. The first instance of these is Cristoforo Buondelmonti in 1420, the charts of Bartolomeo ‘Dalli sonetti’ in 1485, and Bordone, Boschini, Dapper and Piacenza in the 16th and 17th centuries. In 1724, the ownership of the island was given by the Ottomans to the monastery of Patmos, to which it belongs to this day. The only inhabitants of the island for the last 150 years have been goats and the members of the Kampossos family, who farm the land and have a taverna, as the island’s southern harbor continues to operate as a station and refuge for sailing boats.

No land or underwater archaeological survey had ever previously been conducted on and around the island. In 2015 a shipwreck was reported to the Greek Ephorate of Underwater Antiquities, which was briefly investigated before our season started. The ship carried a mixed cargo of Levantine, Carthaginian and South Aegean amphorae dated to the early 3rd century BCE – the first of its kind in the Aegean (marked N1 below). During the first season of our underwater survey, we located a total of seven new shipwrecks (N2-8). Most of the shipwrecks were located at the south and west side of the island and date from the early third century BCE to the early Christian period, while the majority dates from the early to the late Hellenistic period. The Knidian, Rhodian and Koan cargoes of the Hellenistic and Roman shipwrecks underscore Levitha’s connection with Asia Minor and the southeast Aegean.

Although Levitha (ancient Levinthos) is historically an unknown site and an uncharted archaeological territory, the island delivered a wealth and breadth of information during our first fieldwork season. The provenance and chronological range of the cargoes show the importance of the island as a stepping stone in the maritime routes between Greece and Asia Minor, especially in the early and late Hellenistic periods. The Hellenistic fortified acropolis and watchtower certainly underscore the importance that the island must have had in the early Hellenistic period, when the Ptolemies and the Antigonids alternatively sought to take control over the Aegean and the Eastern Mediterranean trade routes in the changing world of power and control of the period.

Professor Mantha Zarmakoupi is the Morris Russell and Josephine Chidsey Williams Assistant Professor in Roman Architecture at the University of Pennsylvania. Her research project ‘Tracing Aegean maritime routes: underwater survey around Levitha, Kinaros and Maura (central Aegean Sea)’ received an award from the Honor Frost Foundation through the British Academy / Leverhulme Small Research Grants scheme in 2017. The underwater survey was conducted under the jurisdiction of the Greek Ephorate of Underwater Antiquities and directed by Dr George Koutsouflakis and Professor Mantha Zarmakoupi.