The aesthetics of drone warfare 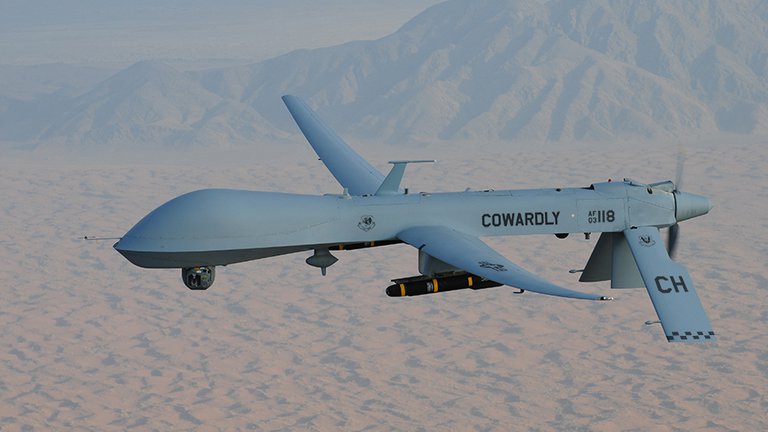 After the wedding ceremony, it was time to take the photographs. As the wedding photographer directed the guests, and the bride and the groom gathered their loved ones close, a young girl – the flower girl? – embraced the bride. Suddenly, she looked up at the sky. Tomas van Houtryve, the photographer who captured a bird’s-eye view of the scene, wondered if she was looking at him – or rather, at the drone he was flying. Maybe it was the buzz of the drone that caught her attention. But he couldn’t know, and the drone was too far to see the people’s faces below.

That’s the thing about drone imagery, especially when looking directly from above, van Houtryve said. “You flick on your television screen and they’re filming some castle or car ad and everything’s shot by a drone. They tend to be colourful, sort of beautiful, and include the horizon. But what struck me about the drone surveillance imagery… is [that it’s like] seeing the world through a soda straw. You have very little context.”

When van Houtryve first started engaging in drone photography, the genre was still relatively new. At the time, the War on Terror saw the expansion of the military drone programme, with drone strikes and targeted killings orchestrated thousands of miles away from the scene of the drone’s gaze. After researching drone strikes from sources like the Bureau of Investigative Journalism and Human Rights Watch, van Houtryve bought his own drone and flew over scenes in the United States that mirrored those documented in the strike reports – like a wedding. In December 2013, a US drone struck a wedding procession in Rad`a in central Yemen, killing 12 civilians and injuring at least 15 others. Concerned about the drone war, the innocent lives lost as “collateral damage”, and the lack of visual record of it, van Houtryve flipped the question around to ask what it meant to look at America through the eyes of a drone.

What are the aesthetics of drone warfare? When I began my project, I aimed to explore issues surrounding drone warfare through two ways of understanding aesthetics: as art, and as the relationship between the body, the self and the material environment. New technologies have not only furthered this latter relationship; they have catalysed new ways of making and experiencing war. What does it mean to participate in war from a distance with little immediate risk to the drone pilot? What does it mean to be subject to surveillance and the long-term threat of violence from above for those who can’t see but can hear the drone? How do the aesthetic dimensions of drone warfare impact upon how war is felt and waged? How are international artists drawing attention to, or attempting to close, what the writer Teju Cole calls the “empathy gap” of drone warfare?

I collaborated with a number of artists and academics and with members of the non-profit organisation Drone Wars UK to understand the complex interrelationship between aesthetics and contemporary warfare. Some artists, like Kathryn Brimblecombe-Fox, felt the need to contrast this kind of warfare with “analogue”, embodied art practices like painting, while emphasising the cosmic evocations of cloud infrastructure. Others, like Mahwish Chishty, focused on the cultural specificity of the people and history that remote and digital war-making obscures. Others drew attention to the way drones relate to satellite imagery and information technology. James Bridle’s Dronestagram posted images of sites of drone strikes on Instagram, while Joseph DeLappe photoshopped images of drones to satirise the asymmetry of drone warfare; he then released them to be circulated on internet search engines. These artists and others were featured in a 3D virtual art exhibition I curated for 2020’s Being Human Festival. Called “The World of Drone Art”, it was powered by the Kunstmatrix platform, which allowed visitors to “enter” and “move” around the gallery space, and to reflect on the multiple levels of digital mediation, prosthesis and embodiments involved in drone technology.

During the project period, there have been rapid developments in the drone world. For example, artificial intelligence and algorithms increasingly undergird military drone operations. More reassuringly, there is also increased capacity for using drones for medical or humanitarian aid, though this is sometimes met with scepticism and reluctance because of the nefarious reputation of drones. In fact, militaries and other armed groups often use the same readily-available consumer drones as humanitarian aid workers, rather than the more expensive and better-known Predator and Reaper drones. Domestic drones are also increasingly a part of our everyday lives, used in hobbyist photography while themselves appearing as the objects of spectacle in mass events like the opening ceremony of the 2020 Tokyo Olympics. What we think of as “drone art” now looks very different from that of van Houtryve’s world in 2013. The current challenge is to think not only about the aesthetics of drone warfare, but of drones in general and what the crossover between military and non-military life means for our present and future.

Dr Beryl Pong is a Vice-Chancellor’s Fellow at the University of Sheffield. Her project, “The Aesthetics of Drone Warfare”, was funded by a British Academy Rising Star Engagement Award. She is the author of British Literature and Culture in Second World Wartime: For the Duration, which was published by Oxford University Press in 2020.