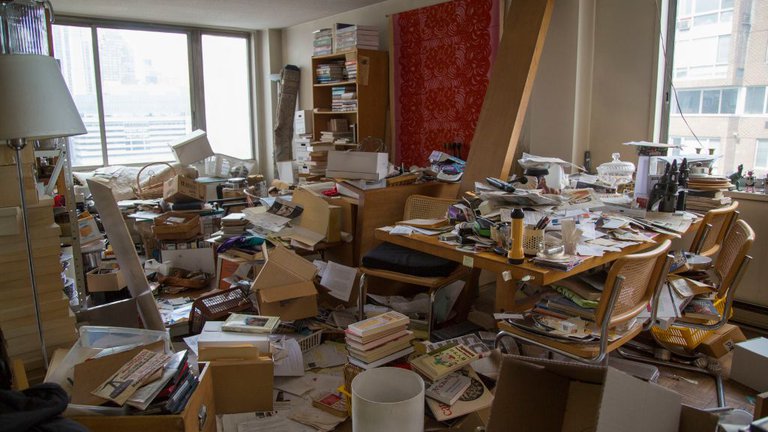 Many of us can relate to the idea of having ‘too much stuff’ and wishing our possessions did not clutter our lives and living space. Still, we often find it difficult and stressful to dispose of many of our possessions. When these behaviours become excessive, some individuals can be diagnosed with the condition hoarding disorder (HD). Those with HD have accumulated so many possessions that they fill and clutter their living areas, causing considerable distress and suffering and even impairing their ability to work and socialise. Investigations of those with HD have pointed to three key recurring characteristics: excessive acquisition, clutter and difficulty discarding.

The history of HD is a curious one, as only in 2013 was it recognised internationally as a condition with which one can be diagnosed. Until then hoarding was considered to be a characteristic of obsessive compulsive disorder (OCD). OCD is a mental health condition distinguished by recurrent, unwanted thoughts and repetitive actions and rituals. Over time, it became increasingly apparent that while there was indeed some overlap, most of those with OCD did not have significant hoarding and importantly, most of those who hoarded did not experience obsessions nor compulsions. Acknowledging hoarding as a separate condition had several advantages, not only for people who hoard and their family members, but also to researchers and clinicians who were trying to better understand the condition so as to ultimately offer better treatments.

Demographics of people who hoard

Research on hoarding had already started in the 1990s and has made significant inroads, though there is still much we don’t understand. One challenge facing researchers and clinicians is the issue of insight. Insight means the individual recognises that their beliefs and behaviours are problematic; this is often a pre-condition to seeking help. Many who hoard have limited insight and are convinced that they do not have a problem, despite evidence to the contrary.

Many who hoard have limited insight and are convinced that they do not have a problem, despite evidence to the contrary.

Much of what we do know is based on people with severe hoarding who have attended support groups or clinics, ie people who come forth identifying that they have a problem. These individuals tend to be predominantly older women, often in their 50s or 60s. This may not appear surprising, as there are many conditions that are biased towards one of the sexes. However, surveys in the general population suggest both men and women have similar issues with hoarding. So where are all the males with hoarding? There is another mystery. When talking to these typically older people who hoard, they usually report developing problems in their late teens and early twenties. So where are all the younger individuals who hoard?

A possible link to ADHD

A clue to these questions may come from what we do know about hoarding: those who hoard have problems with inattention, planning and organising. Such problems can be also found in those with Attention Deficit/Hyperactivity Disorder (ADHD). The similarities have not been missed by those interested in HD. In fact, it is believed that many older hoarders have lived with undiagnosed ADHD since childhood. But if there is a link between HD and ADHD, does it go both ways? Would people with ADHD also have problems with hoarding? This is important, as there are more people with diagnosed ADHD than HD. Moreover, whilst HD researchers are aware of the connection, researchers of ADHD and clinicians often are not.

Thus, we looked at different aspects of hoarding in patients attending an adult ADHD clinic. We compared them to control individuals with the same ages, gender and education levels but without ADHD. Relying on self-report, we found a much higher rate of clinically meaningful hoarding symptoms in the ADHD group compared to controls, which was also accompanied with higher everyday functional impairment. There was no relationship with gender and although those who hoarded tended to be a bit older than other ADHD patients, they were on average in their late 30s. Even those who did not report significant distress and impairment due to hoarding still reported greater levels of excessive acquisition, clutter and difficulty discarding compared to controls.

These results suggest some individuals seeking help for ADHD may also have issues with hoarding that impair their everyday life. The findings should be useful for future understanding of HD, as we should find out whether these younger individuals are similar to the older samples upon whom our knowledge of HD is based. Importantly, the findings also point to the need for routine assessment of hoarding in those with ADHD as they do not typically disclose issues, even if it leads to difficulties in their lives.

Dr Sharon Morein is a Senior Lecturer at Anglia Ruskin University. She received a BA / Leverhulme Small Research Grant in 2015-16. You can read more about her work on cognitive control and mental health research at Morein Lab. Her research into the link between hoarding and ADHD featured in the British Academy Virtual Summer Showcase.