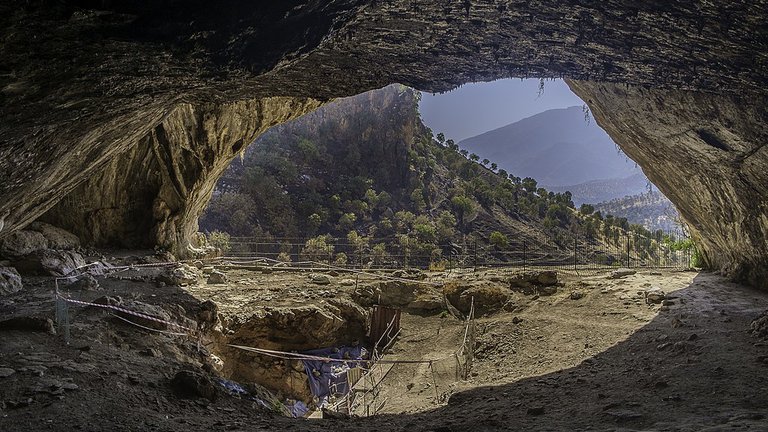 Modern humans are the neighbours from hell. We tend to judge everything around us by our own terms, so being our nearest biological relative in an evolutionary sense is always going to be difficult. Neanderthals, for they are those relatives, have been judged as primitive, violent and cannibalistic. More recently we have revised views and can see them as more like us in producing art, wearing jewellery and caring for the infirm. We even deigned to breed with them, but to call someone Neanderthal remains derogatory.

My research exploring the nature of Neanderthal behaviour, as evidenced at the site of Shanidar in Iraqi Kurdistan, explores some of these issues. Previous work at the site by the late Ralph Solecki recovered the remains of nine Neanderthals. Some were isolated and crushed by rockfall but others were said to have been deliberately buried. He also claimed Neanderthals were burying their dead with flowers and looking after injured and impaired individuals. But is this more “caring” image sustainable in the light of new techniques of analysis?

Working with colleagues Graeme Barker and Emma Pomeroy from the University of Cambridge and Chris Hunt from Liverpool John Moores, using professional archaeologists from the Canterbury Archaeological Trust, and with the support of the Department of Antiquities for Kurdistan, new field work has rediscovered the burial site of several Neanderthals, plus the location where another lay buried under a rockfall.

The application of targeted “micro-excavation” and sampling for plant remains, pollen and eDNA (e for environmental), should allow us to investigate the accuracy of the earlier findings. eDNA is the DNA found in sediments that can inform on the presence of various species: plant, animal and human.

Several seasons’ field work has been completed and the remains of the upper part of a Neanderthal skeleton have been recovered. This individual had been placed into a hollowed-out scrape in the cave surface that had a layer of plants in its base. Work by Chris Hunt on the plant materials continues, but it is evident there is an association with plant remains and the burial. Work also shows that the ground was altered to take the body – supporting the idea of deliberate burial. Delicate excavation by Emma Pomeroy has allowed these associations to be made. It has also enabled reconstruction of the bones of the individual, which had been highly fragmented by crushing from the overburden of sediment. It is hoped that the individual will be placed into the burial sequence originally described by Ralph Solecki in the 1960s and 70s. The association of the body with small limestone rocks may be the result of grave marking.

The grave lies alongside a large, vertically lying limestone pillar, which may have been why the Neanderthals chose this spot for burial – the vertical rock would look suspiciously like a modern gravestone to us! In a cave with a floor area of approximately 1,000 metres, these people returned to the same spot to bury individuals, over a currently unknown period of time. The cave was clearly seen as a special place in the landscape for burials.

Lying close to the hand of the buried Neanderthal was a single chert artefact. Stone tools are rare in the deposits around the burials, and so while it may be a coincidence, the artefact may have been held by the individual during burial.

Work continues on the excavated material and a new season is planned for later this year, circumstances permitting. Further insight into Neanderthal life, as well as death, will be pursued. The Shanidar evidence continues to support the contemporary view of Neanderthals as more like us, with a rich cultural and social life.

Dr Tim Reynolds is a Senior Lecturer at the Department of History, Classics and Archaeology at Birkbeck, University of London. Dr Reynolds received funding for his research project “Neanderthal Life and Death at Shanidar Cave (Iraqi Kurdistan)” through the BA / Leverhulme Small Research Grants scheme in 2018.

Issues of theory and method in the analysis of Paleolithic mortuary behavior: a view from Shanidar Cave