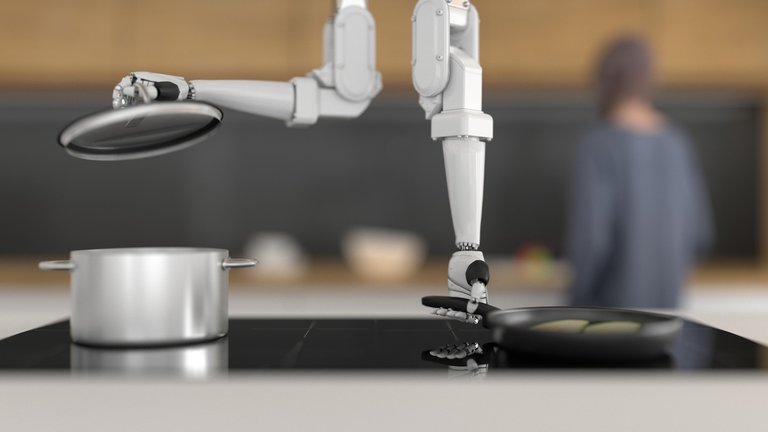 How AI will impact paid work has been a concern for experts as well as the popular imagination since the idea of AI emerged in the 1950s. Yet, as Robert A. Heinlein’s fictional inventor points out in The Door into Summer, “amazingly little real thought had been given to housework, even though it is at least 50 per cent of all work in the world” when he sets about designing robots to free housewives from their labours. Thus, Heinlein’s 1957 novel not only predicted the Roomba (“It went quietly looking for dirt all day long, in search curves that could miss nothing, passing over clean floors in its endless search for dirty floors.”) but also how little attention researchers would give to automation of work in the domestic sphere. In this blog post, we explore some parallels between automation in paid and unpaid work, and draw out some issues we think researchers should be alert to in both spheres.

Domestic work has several key characteristics. How tasks like childcare or providing food are carried out can have major consequences for individuals and their current and future well-being. Unpaid domestic work is also very time-consuming, reaching an estimated 3-4 hours per day for working-age adults in rich countries – without taking into account domestic tasks outsourced to the market. Finally domestic work, different from most other work, is associated with a particular location: home.

Cleaning and elderly care are two examples of domestic work where paid and unpaid labour take place and where automation technologies are having potentially large impacts.

People who work as cleaners are often women, working class and from ethnic minority and /or migrant backgrounds. As AI technologies develop and automation of such tasks increases, this poses some complex issues.

First, in the world of paid housework, AI is changing how cleaners are managed. Apps can be used to allocate cleaning jobs and to schedule cleaners’ tasks. As with many other forms of “platform work”, this raises concerns about fairness when cleaners can be automatically fired, and safety when they can be allocated unreasonable workloads. Furthermore, cleaners’ work could be automated altogether.

Secondly, cleaning robots carry a significant price tag and hence are more available to higher income households – unlike Heinlein’s vision of cleaning robots sold at discount stores to every household. Even now poorer men and women spend more time on housework than their richer counterparts. As more domestic cleaning gets automated, the existing gap in available time freed from domestic labour between rich and poor households may increase further.

There is a further concern when AI technologies are deployed in housework: the collection and use of private data. Algorithms managing cleaners will collect data about the speed at which workers perform their tasks, raising ethical concerns. Furthermore, for technology to deliver high quality domestic work, its algorithms will need to acquire substantial data about private households. For example, data collected by a smart cleaning robot could allow inferences on the size of a household, domestic cleaning routines and perhaps more (if the robot has object recognition capabilities, necessary for sorting, for example). As a smart device will likely be wi-fi enabled, technically it can be geolocated with a high-level of precision. Which data should smart domestic appliances be allowed to collect, store and share, who will own it and determine its use?

Despite all these issues, automation technologies hold immense emancipatory potential. If we can provide security and access to good work for those currently working as cleaners, then the loss of cleaning jobs to robots need not be negative. Moreover, domestic work is highly gendered – successful automation of housework tasks, including cleaning, could reduce gender gaps in how men and women spend their time at home and in employment. In Heinlein’s novel, his engineer protagonist seeks to abolish the saying “women’s work is never done” with his robots, and 64 years later this still seems a laudable goal.

Further, if automated systems replace care workers, we could lose the hard-to-quantify human component of care with long-term consequences for those receiving it. A recent study of automating care work in elder care homes in Japan found that “The introduction of these robots served to reconfigure care – increasing the amount of work tasks for human caregivers, deskilling aspects of care labour, and raising overall costs. The robots displaced rather than replaced human labour”.

Even before care robots become common, there is a risk that human carers are reduced to their mere physical functions, which are to be optimised for speed, through algorithmic management. Algorithmic systems already monitor and schedule carers much the same way as cleaners, with some going further to monitor carers’ behaviours by checking when they are standing or sitting down. This alienates and degrades the experiences of both worker and client.

Yet, we shouldn’t think of AI uses in care as inherently negative. They reflect the systems they are designed to perpetuate, in this case a care system stretched beyond reasonable limits. On the positive side, if set up appropriately, smart white goods (and other domestic devices) could provide effective way of monitoring well-being of care recipients. For example, if an elderly person does not open the smart fridge in the morning around the usual time, it could alert a relative or care worker.

What can we learn from these cases?

We are a long way from Heinlein’s sci-fi vision:

“I wanted a gadget which could do anything inside the home—cleaning and cooking, of course, but also really hard jobs, like changing a baby’s diaper or replacing a typewriter ribbon… I wanted a man and wife to be able to buy one machine for, oh, say about the price of a good automobile”

While no one robot can perform all these tasks, automation in the domestic sphere is increasing, both reshaping existing human labour and replacing such labour. It raises difficult questions about how to preserve the dignity and autonomy of paid domestic workers, how to prevent new technologies from creating new social inequalities, and how to manage the collection and processing of data generated in people’s homes.

And yet, despite all these worries, we can envisage a future where our time is freed up from chores we find tedious. The potential of these technologies should motivate us to steer them in positive directions.

Helena Hollis undertook her PhD research in the UCL Department of Information Studies, and she also worked on the UCL and British Academy project on AI and the Future of Work. She is now a Senior Researcher at the Institute for Community Studies.

Ekaterina Hertog is a Research fellow at the Department of Sociology, University of Oxford. She leads the DomesticAI research project, that explores AI's potential to transform unpaid domestic work in the UK and Japan.