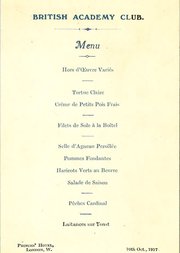 In 1917, the British Academy – established by Royal Charter in 1902 – was still evolving its customs and practices. In the autumn of that year, the idea of setting up a ‘Dining Club’ for Fellows of the British Academy was explored. On 24 September 1917, the Academy’s Secretary, Israel Gollancz, sent out a circular inviting Fellows to attend the inaugural dinner on Wednesday 10 October 1917 at Princes’ Hotel in Piccadilly. The cost quoted was 10s 6d a head (excluding wine).

Many of the Fellows who replied to Gollancz felt that the dining club was an excellent idea. The historian T.F. Tout was enthusiastic, as he thought that it would ‘make the B.A. more alive’. Others approved of the idea in principle, but were unable to attend due to prior engagements or poor health. F.J. Haverfield, a professor of ancient history, wrote: ‘I wish I could come, but I fear that my doctor will dislike it, or, at any rate, he will confine my meat and drink at it to toast and water!’

Several Fellows thought that the price of the dinner was too high. The economist H.S. Foxwell suggested that the Café Royal in Regent Street might be a cheaper option, although he acknowledged it was ‘now a little out of fashion’. W.M. Ramsay wrote from Edinburgh: ‘I dislike the idea of wasting 10/6 on a dinner, and all the more as all the public dinners in London I ever was at were so intolerably bad.’ For the classicist Gilbert Murray the extravagance had a moral dimension: ‘my democratic conscience would feel a little uncomfortable at the proposed feast’.

Many Fellows questioned the wisdom of embarking on dining of this kind during wartime. Reginald Poole’s letter was typical of many received: ‘While I am in entire agreement as to the proposed plan for establishing a British Academy club in the future, I am bound to say that the present does not seem to me to be a suitable time for starting it.’ The philosopher James Ward wrote: ‘After thinking the matter over and discussing it with others I have come to the conclusion that the time is inopportune.’

The timing was indeed bad. On the night of 24 September (the very day on which the Dining Club invitation had been sent out) there was a bombing raid on London, the first of a flurry of night-time bombing attacks by the Germans towards the end of that month. Londoners were sent scurrying to sleep in the Underground stations. Cambridge-based archaeologist William Ridgeway wished the club well but said, ‘I have no inclination to go to town when air raids are of nightly occurrence.’ And George Prothero was another Fellow who cited the ‘raiders’ as a disincentive.

In the end, out of a total Fellowship of 98, only 10 Fellows actually attended the dinner (Percy Gardner had to cancel at the last moment due to a family bereavement). Although a third of the Fellowship had expressed some sympathy for the idea, the Dining Club does not appear to have had any further outings.

The menu card from the one and only meeting of the British Academy Dining Club, Wednesday 10 October 1917. (BAA/SEC/1/50)


It wasn’t until 1956 that the tradition of a British Academy Annual Dinner finally took off. These occasions were initially funded by the lawyer A.L. Goodhart, who was elected to the Fellowship in 1952, and who was inspired by the great success of the Academy’s 50th Anniversary Dinner in that very year [note 1].

‘From the Archive’ research by Karen Syrett, British Academy Archivist and Librarian.