Wales, the United Kingdom and Europe 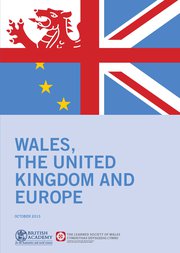 The British Academy, in partnership with the Learned Society of Wales, presents a report that reviews the complex relations between Wales and the United Kingdom as a whole, and within Europe.

The Scottish referendum on independence has consequences that stretch beyond Scotland’s borders. Whatever the outcome, Wales’ relationship with the rest of the United Kingdom is likely to change significantly over the coming years.

This report analyses Welsh devolution from a multitude of perspectives, looking at the historical and social ties between Wales, the rest of the United Kingdom and Europe as well as analysis of the key differences in social attitudes around the UK on, for example, EU membership.

The report also looks at the constitutional future of Wales and the UK, Welsh legal identity, a broader European perspective and the unpredictable future of public spending in a further divided nation. Using other European nation-states and regions as examples, this report considers potential governance changes and scenarios between Wales and the rest of the UK.

The report is a summary of two conferences, hosted by the Learned Society of Wales and the British Academy, in May 2013. The conferences brought together academics from across the humanities and social sciences to offer unique insights into questions on Welsh governance, public spending and diplomacy within the UK and within the EU framework.