by The British Academy and the University Council for Modern Languages 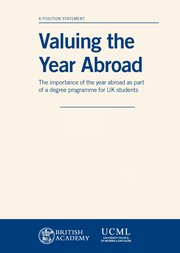 In a joint statement, the British Academy and the University Council for Modern Languages call on Government and Universities to recognise the strategic importance of the year abroad – delivering both competitive employability advantages for the students themselves and wider long term benefits for the whole UK economy.

The statement is supported by a survey undertaken by Thirdyearabroad for which nearly 600 graduates submitted case studies illustrating the academic, cultural, intercultural, linguistic, personal and professional benefits derived from the year abroad. Of the respondents, two thirds estimated that their residence abroad was a significant factor in getting their first and subsequent jobs, while no fewer than 86% considered the year abroad to be the most valuable part of their degree.

Making recommendations to government, universities, students and employers, the benefits of the year abroad are outlined under four heads: development of language skills; intercultural understanding and openness; personal confidence and development; and skills for competitiveness, professional development and employability.

The position statement was launched at an international conference held at the Academy on 27 March 2012.