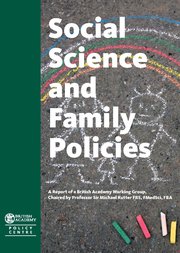 This report argues that values are at the centre of all political issues. It makes clear that it is the duty of government, not social scientists, to decide both the values it wishes to espouse and their relative importance.

Science can, however, provide evidence on whether proposed remedies will work, on their unintended consequences, and on how well policies are being implemented.

Social scientists and politicians, therefore, have different but complementary roles.

A central question for the report is: Why is good social science needed by policymakers?

The authors show how good social science can:

Sir Michael Rutter, Fellow of the British Academy and lead author of the report said:

“Social scientists and politicians have distinct, but equally important roles. This new report sets out what those are and examines how these two professions can work together to create successful policies for families and young people.”

Social Science and Family Policies does not seek to make recommendations about specific family policies, but rather to encourage support for the high quality social science research needed to address the complicated family issues of the 21st century.

It is hoped that policymakers will use the report as a tool to develop greater and more beneficial interaction with social scientists on an issue that all parties see as fundamental.