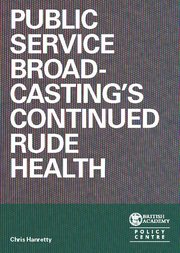 For the past thirty years, the state’s role in funding broadcasting has been under attack. The rise of free market ideas and considerable scepticism regarding the role of the state and state-owned enterprises signalled a period of decreasing political support for public service broadcasting. The introduction of cable and satellite television and, subsequently, the advent of digital terrestrial television, have also contributed to claims that it is now experiencing a terminal decline.