Past, Present and Future: The Public Value of the Humanities and Social Sciences 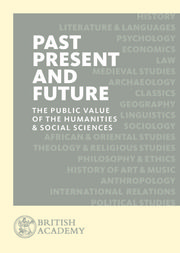 The booklet was launched at a reception in the House of Commons on 17 June 2010. The President of the British Academy, Sir Adam Roberts, warned that drastic funding cuts to university and research budgets would imperil the massive contribution to the UK’s economic, social and cultural life made by the humanities and social sciences.

Sir Adam highlighted the “enormous reservoir of public value” which these disciplines generate, outlining their contribution to Britain’s health, wealth and international reputation.

He also challenged “the sterile and outdated notion of a society of two cultures” - drawing attention to the increasing mutual dependencies of the natural sciences and the humanities and social sciences in responding to the major social challenges of our age.

The event was sponsored by Lord Patten of Barnes, Chancellor of Oxford University, who said the humanities and social sciences were “undervalued and underfunded”. He commended the Academy’s new booklet and added that it was depressing that such a case needed to be made – especially as many of the senior politicians in all parties were themselves beneficiaries of a humanities or social science education - and that without them the country would be spiritually impoverished.