by Peter John and Liz Richardson 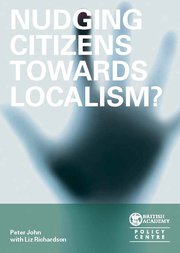 The idea of ‘nudging’ or persuading citizens into certain behaviours has gained considerable popularity in recent years and has become a particular policy focus for the coalition government. But how does this interest fit with the government's desire to decentralise power and create a 'Big Society'?

In this report, Peter John and Liz Richardson examine whether positive behaviour change is most effectively achieved through central government action, or best decided and implemented at a local level, through the combined efforts of local agencies, the voluntary sector and citizens.

This report finds that the exact relationship between government action, citizen behaviours and effective public outcomes remains hazy, despite examples of good practice and robust evidence across government. There are real opportunities to use the nudge approach at a local level, but without more experiments to close the gap in evidence, government might have to settle for only moderate changes in citizen behaviour.

The report was launched at a panel discussion on the morning of 16 May 2012 featuring: