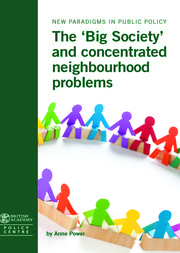 The term ‘Big Society’ was first coined by David Cameron in 2009, but the notion that local groups of citizens can make democratic decisions in the best interest of their local communities has longer roots. In this report, Anne Power sets out its history in the mutuals and cooperatives formed to combat the devastating effects of 19th-century industrialisation, and 1960s and 70s movements such as the American ‘Great Society’ and the UK Community Development Projects.

The ‘Big Society’ and concentrated neighbourhood problems concludes that communities and the state are interdependent. In their capacity to tackle local problems, communities rely not only on the initiative, commitment and motivation of ordinary citizens, but on government for a strong supportive public framework which includes steady, low-level funding.