Lost for Words: The Need for Languages in UK Diplomacy and Security 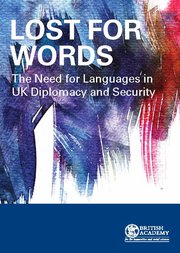 A formal consultation process took place with government departments and agencies, higher education institutions (HEIs), language training providers, and interested third party experts in order to gain an overview of current language capacity within the Government. Drawing on informal interviews and extensive desk research, the report identifies and analyses the challenges to building up language capacity across government departments, and gives recommendations on how to address the deficit.

"In an increasingly diverse and interconnected world, language skills are gaining rather than losing their relevance. Languages are a critical tool through which UK diplomats and government staff can deepen their knowledge and build the trust that is necessary to promote and protect British values and interests internationally. If steps are not taken to reverse the current declining trend in language skills, Britain may indeed be in danger of becoming 'lost for words'".

"The consequences of being lost in translation in international affairs are all too often very real and can be tragic. It's a point that my Committee has highlighted time and time again, in almost every single inquiry we've undertaken since 2010. I therefore welcome the British Academy report which is being launched today. It raises many interesting points, in particular the potential of the UK's native or heritage non-English speakers for UK diplomacy; the need for a cross-government approach; and that the language problem is not just a problem for the government – it needs to be tackled all the way from schools and universities across to business too."

The report strongly advocates that: