Languages in the UK: a call for action

by the British Academy, the Academy of Medical Sciences, the Royal Academy of Engineering and the Royal Society 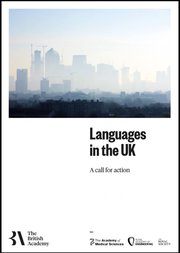 Backed by the Royal Society, the Academy of Medical Sciences, and the Royal Academy of Engineering, this statement from the British Academy says that the prospect of Brexit ‘makes it even more important for the UK to have the languages needed to forge wider commercial and other links’.

The four national academies say that the UK’s poor language capacity has resulted in the loss of economic, social, cultural, and research opportunities. The economic cost of the UK’s linguistic underperformance in terms of lost trade and investment has been estimated at 3.5% of GDP.

The call is directed at government but also business, policymakers and social organisations. A UK strategy for languages would coordinate with existing ones in Scotland and Wales and build on current policies in England and Northern Ireland. It will be followed up later in the year by detailed proposals. The national academies call on the Government to adopt and implement a national strategy for languages and engage with a coalition of organisations who stand ready and willing to help implement it