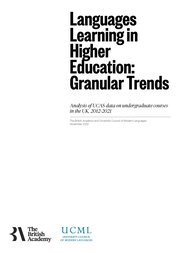 This report contains analysis of 10 years of admissions data for undergraduate modern language courses in the UK, using data from the Universities & Colleges Admissions Service (UCAS). This report is an update on previous work carried out in partnership between the British Academy and UCML, published in 2021: ‘Granular Trends in Modern Languages’.[1] This report focuses on degree programmes, but it should be acknowledged that there is a lot of language learning that takes place in higher education that is non-credit-bearing,[2] which is beyond the scope of this report.

Data on language learning in higher education over the past decade shows a complex picture. Exploring the data at a more granular level allows us to better understand some of the changing patterns in how students are applying for and being accepted onto courses, where they are opting to study, and the diverging fate of some individual languages. The findings of this report offer a more nuanced, multi-dimensional picture than the general narrative of decline that is often found in the media in relation to language learning.

It is important to note that the analysis conducted is of admissions data between 2012-2021, during which multiple external factors have influenced on student demand, including departure from the European Union, Covid-19, the introduction of alternative education routes, and changing economic conditions. Most importantly, this period corresponds to a net decline of roughly 76,000 people within the 18-year-old population.[3] The emerging demographic increase in the 18-year-old population - set to last until 2030 - has the potential to mitigate some of the negative trends identified in this report. Policy makers and university leaders should be live to this change in demographics and the potential for trends to shift as a result.

Single subject degrees have declined, while combined and joint degrees are more stable