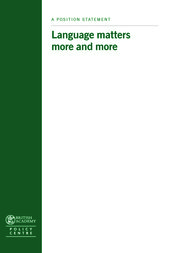 In this statement, launched on 9 February 2011, the Academy argues that languages matter at all levels – from primary to post-doctoral – in research, business and society.

Highlighting that the UK is in danger of becoming  a nation of monoglots in a world of polyglots, the Academy argues that the UK’s research base in languages, linguistics, translation and other language-related areas is internationally competitive and we must strive not to lose that edge – and instead to widen its scope.

Outlining the value of languages, the statement calls for universities to take a leading role in addressing the growing mismatch between supply and demand.