Enlightening the constitutional debate: currency, banking and financial services after the Scottish referendum 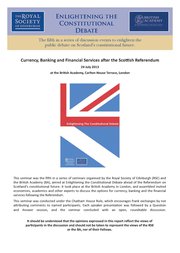 On 24 July 2013 the British Academy held a policy forum to discuss the questions surrounding banking and financial services in the aftermath of the referendum on Scottish independence. The intention of this forum was to discuss the currency options available to an independent Scotland and the implications of that choice for the rest of the UK, and the knock-on implications for fiscal rules and financial regulation.

This forum, the second of three British Academy forums on the issues surrounding Scottish independence, forms part of a series of events held in conjunction with the Royal Society of Edinburgh.

The forum was hosted and chaired by Professor Tim Besley CBE FBA and included brief presentations from a number of speakers: