Global Power, Influence and Perception in the 21st Century 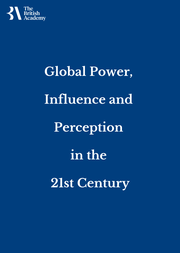 This is a sobering time in the history of thought about power in general, and soft power in particular. It is especially sobering in relation to attempts to build states on a Western model, which has been the focus of a great deal of international activity, both civil and military, over the two and a half decades since the end of the Cold War.

Soft power is a reality, and will have a key role in hard times, especially in light of the disappointments following certain uses of Western military power in deeply divided post-colonial societies. However, like any other form of power, soft power is neither easy to manage nor free from dangers – especially the dangers that result from lazy assumptions that the rest of the world wants to be more like us, and that it can be transformed without producing antibodies.