Minority legal orders in the UK: minorities, pluralism and the law 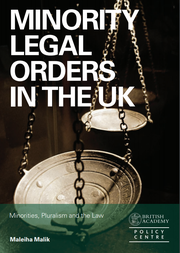 Minority legal orders - the systemic, distinct, religious or cultural norms of groups such as Jews, Christians, Muslims, and others - are often misleadingly described as ‘parallel legal systems’. Since 9/11 and 7/7 they have been mainly discussed in the context of Islam and sharia law, and more often than not as an ominous threat to UK liberal democracy.

This publication argues that a liberal democracy such as the UK has a responsibility to consider the rights and needs of those from minority groups who want to make legal decisions in tune with their culture and beliefs; it also has a responsibility to protect those ‘minorities within minorities’ who are vulnerable to pressure to comply with the norms of their social group.