The 2001 UNESCO convention on the protection of underwater cultural heritage: the case for UK ratification

by The British Academy and the Honor Frost Foundation 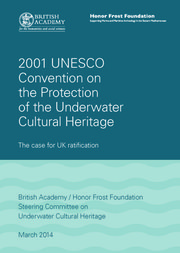 In March 2013 the British Academy and the Honor Frost Foundation convened a joint Steering Committee of underwater cultural heritage experts and senior archaeologists to work towards the UK ratification of the 2001 UNESCO Convention on the Protection of Underwater Cultural Heritage.

An independent Impact Review has just been published, which details the UK's routes towards ratification, demonstrating that the reservations previously raised by the UK government are no longer of sufficient concern to oppose ratification.

In this briefing note, the British Academy and the Honor Frost Foundation are calling on the government to do more to protect the UK’s rich maritime legacy by ratifying the 2001 UNESCO Convention of the Protection of the Underwater Cultural Heritage. Without ratification the UK is largely incapable of offering protection to UK wrecks lying beyond our own waters.

The centenary of the First World War is ample reminder that the remains of many British ships and seafarers rest on the seabed beyond our Territorial Sea. The UK should take advantage of the positive mechanisms set out in the Convention to safeguard the last resting places of so many and ensure that the UK’s interests are fully respected.

The steering group members are: