The Kenyon Medal is awarded annually in recognition of work in the fields of classical studies and archaeology. 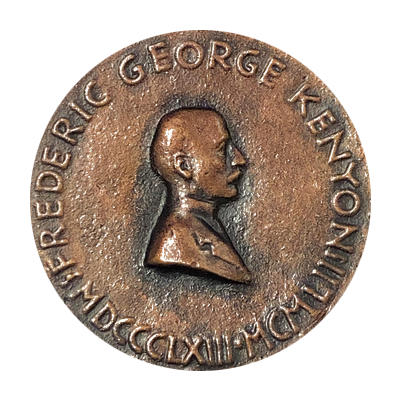 The award was endowed by Sir Frederic Kenyon (1863–1952), elected a Fellow in 1903 and serving in turn as the Academy’s sixth president and second secretary. The medal was awarded for the first time in 1957.

a) Eligible nominations can be for any scholar whose work relates to classical studies and archaeology.

Nominations for the Kenyon Medal are currently open and may only be made by Fellows of the British Academy.

Entries should be submitted electronically to prizes@thebritishacademy.ac.uk and should state in the email subject line "Nomination Kenyon Medal 2022".

The deadline for submissions is 31 January 2022. Submissions received after this date will not be considered.

Nominations will be reviewed, and the winner selected, by the Kenyon Medal panel:

If you have any queries submitting a nomination, please email prizes@thebritishacademy.ac.uk

Professor David J. Breeze is awarded the 2021 Kenyon Medal for his outstanding international contribution to the archaeology of the Roman Empire.

David Breeze is a graduate of Durham University where he fell under the spell of Eric Birley. His subsequent research has focused on Roman frontiers and the Roman army. After serving as Chief Inspector of Ancient Monuments for Scotland, he led the team which successfully nominated the Antonine Wall as a World Heritage Site and helped create the Frontiers of the Roman Empire World Heritage Site. He has served as chair of the International Congress of Roman Frontier Studies as well as president of several British archaeological societies. He is an honorary professor at the Universities of Durham, Edinburgh, Newcastle and Stirling.

"I have spent a lifetime seeking to understand better Roman frontiers such as Hadrian’s Wall and thereby hope to appreciate the mindset of their builders and how they operated."