The Edward Ullendorff Medal is awarded annually for scholarly distinction and achievements in the field of Semitic languages and Ethiopian studies. 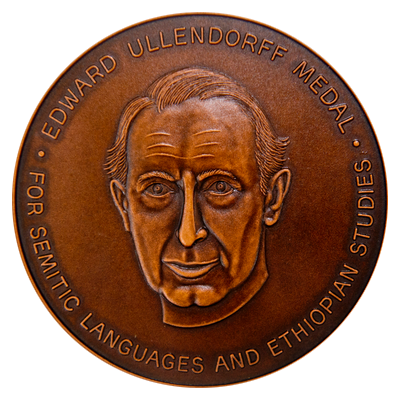 This award commemorates Professor Edward Ullendorff (1920-2011) who was elected a Fellow of the British Academy in 1965. His widow has generously supported the establishment of a medal in memory of her husband in view of his long association with the Academy, which he valued greatly. The medal was first awarded in 2012.

Eligible nominations can be for any scholarly distinction and achievements in the field of Semitic languages and Ethiopian studies.

Professor Werner Diem is awarded the 2022 Edward Ullendorff Medal for his immense contributions to Arabic and Semitic Philology through his numerous publications and research.

Werner Diem is a Professor Emeritus of Cologne University. Born in 1944, he graduated in 1968 at Munich university with a theme of Arab lexicography, where he stayed as assistant at the Sprachwissenschaftliches Seminar. Having spent two years at the German Orient-Institut in Beirut, he became assistant of Anton Spitaler at the Seminar für Semitistik of Munich University in 1971. In 1972 he completed his postdoctoral thesis („Habilitation“) on modern Arabic diglossia and was appointed chair of Orientalische Philologie at Cologne University (1976). Despite invitations to universities of Heidelberg and Erlangen/Nuremberg in 1988 and 1995 he remained at Cologne, becoming Professor Emeritus in 1999. Diem has so far authored 31 monographs and about 90 other scholarly papers.

Diem works on Semitic languages, notably Arabic, Aramaic and Ethiopian, including comparative Semitics, with a focus on Arabic, from the pre-Islamic inscriptions through classical and post-classical Arabic to today’s standard language and dialects. Many of his contributions pertain to his extensive reading and editing of original pre-modern Arabic documents written on papyrus and paper, including Judaeo-Arabic and Hispano-Arabic documents. A further area of interest of his is classical Arabic poetry from pre-Islamic times to the Mamluk period. Diem is presently preparing a monograph on Arabic ekphrastic poetry of the 10th-14th centuries CE.

“I feel extremely honoured to have been nominated for the Edward Ullendorff Medal. Ullendorff was a great scholar and it is nice to think that by receiving the medal named after him, I would in some way succeed him.

"I got to know Ullendorff at a congress in London in the 1980s, and after that we stayed in touch by letter and telephone on various occasions. Although he had spent most of his life in Britain his German was still impeccable.

"In commemoration of Edward Ullendorff, two verses of an Arabic poem come to mind:
‘Noble deeds are pearls among men. Their originator passes away, but their memory endures. / You can think of a noble man as a burning candle of ambergris. When it goes out its scent spreads.’ "