10-Minute Talks: What does the Good Friday Agreement mean? 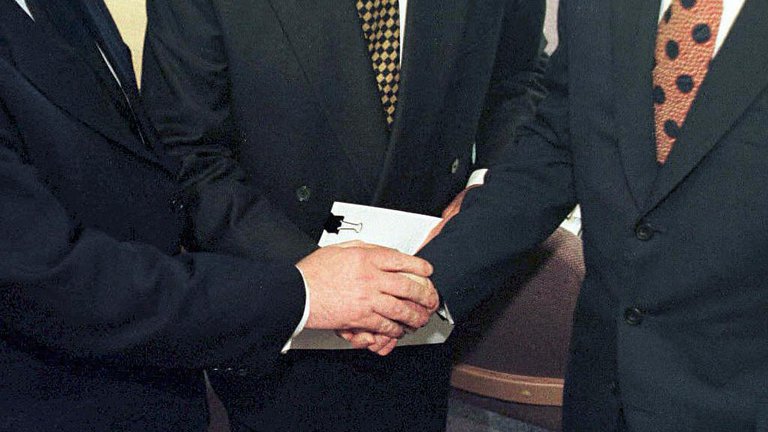 Professor Christopher McCrudden FBA engages with the differing (and conflicting) historical, legal, and political interpretations as well as considering more broadly, what exactly is the Agreement? This talk was part of the Imagine! Belfast Festival of Ideas and Politics 2021.

Hello, my name is Christopher McCrudden. I'm a Professor at Queen's University Belfast in the School of Law and L Bates Lea Professor at the University of Michigan Law School, and I'm a Fellow of the British Academy. This talk is part of the Imagine! Belfast Festival 2021, and I'm delighted to be speaking to you today. The topic of my comment is on the interpretation of the Belfast Good Friday Agreement, or rather the interpretations (plural) of the Agreement depending on whether the interpreter considers it primarily a legal, political or historical document.

When we drill down into the Agreement, there's much in the text that's less clear than we might have wanted. So, for example, who are the “people of Northern Ireland” on whom so much of the text rests? What's the status of power-sharing in the event of a referendum opting for unity between Ireland and Northern Ireland? What role can the British government appropriately play during the referendum campaign? Is a referendum in favour of unity required in Ireland in order to allow unification to take place? Or, even more recently, what's the meaning of “consent” in the idea of the principle of consent in the Agreement?

Basically, the issue that I want to talk about is how we should go about interpreting that Agreement.

More broadly perhaps still, what exactly is the Agreement? It's clearly a text with considerable historical resonances and with an emerging history of its own. It was a hard-fought political bargain between the contending communities of Northern Ireland. It's also an agreement between two sovereign states. It is binding in international law and thus gives rise to legal obligations on those states. It also has a legal status at the domestic level in both Ireland and in the United Kingdom, both of which partly incorporated the Agreement into their respective legal systems – in the former case, in Ireland, by the way of constitutional referendum, in the UK by way of legislation, primarily the Northern Ireland Act. In light of all of this, how should we interpret the Agreement, and in particular, how should we interpret it when the text appears controversial or less than clear? By this question of interpreting the Agreement, I don't mean “what does such-and-such provision mean?” at the narrow level, but rather, what are the methods by which we should seek to give meaning to the Agreement?

To put it more accurately, if somewhat more pretentiously, what are the hermeneutics of the Agreement?

In other words, what are the principles of interpretation that apply to it? The question that I'm suggesting we consider is a complicated question and worth pondering because of the many different ways of looking at the Agreement, and thus the opportunity for multiple and sometimes-competing hermeneutics.

The perspective of a political scientist is likely to differ significantly from that of a constitutional lawyer or from that of a historian or an international judge, leading to the potential, I suggest, for different principles of interpretation to be applied, and as a result, different understandings of the Agreement to result. This may well be done in the utmost good faith. We don't have to build into this process any element of bad faith to see that different interpretations may well arise. There are several intriguing divergences between the principles of interpretation that drive from a view of the Agreement as a political compromise, those that derive from the historian, and those who view it as a legally-binding Agreement.

There are considerable differences within the respective disciplines of history, law and politics, but some broad differences are apparent in how these different disciplines interpret texts. Those coming to the Agreement wearing a historian's hat, for example, tend to adopt the view that the Agreement should be interpreted, at least to some extent, in light of what the intentions of the drafters and the politicians were at the time of the Agreement. The details of the terms on which the Agreement was concluded are now relatively well-known, at least in outline.

Several things seem to be clear about what happened in those exciting days before Easter 1998. By the end, the negotiations were rushed. The negotiators were close to exhaustion. The drafting was often haphazard and the different strands in which the negotiations were conducted were only loosely packed together. The famous ambiguity of the Agreement was not always intentional or strategic. Sometimes it just resulted from a somewhat-chaotic process. Viewing the Agreement historically, gauging the intention of the parties on any particular issue in such a way as to attempt to lead to a definitive interpretation is, more likely than not, to lead to the conclusion that the Agreement doesn't address the issue at all.

The principles of interpretation commonly followed by lawyers, on the other hand, are generally not that concerned with whether or not the founding fathers or mothers of the Agreement knew what they were doing or discussed it or intended a particular result. Whether the drafters thought about what they actually achieved is, from that point of view, neither here nor there. The issue for lawyers is rather what the text says, interpreted against the background of what the aims of those parts of the Agreement is, an aim that can gleaned from the structure and purpose of the Agreement and the fact that it's nested in international law obligations more broadly.

As the Agreement moves closer and closer to centre stage in Anglo-Irish relations, and potentially to UK-EU relations, post-Brexit, the interpretation of the Agreement will become more and more contested.

The temptation is for each interpreter to become, as lawyers would say, “results-driven”, meaning that the method that produces the favoured substantive result is adopted rather than the method that's most appropriate for the situation in which the question of interpretation arises. That's not the way forward.

A historical hermeneutic, legal hermeneutic and a political science hermeneutic. If the Agreement is to retain and – one hopes – increase its legitimacy over time, we'll be increasingly presented in the future with a confrontation between these differing and conflicting hermeneutics which, if unresolved, may possibly even endanger its future. We need to discuss these differences, if we're not to talk past each other in the serious debates that will occur, inevitably, as to how the Agreement should be interpreted. What I've tried to do in this talk is intended to encourage such conversations. Thank you for listening.

"Moving Past the Troubles: The Future of Northern Ireland Peace," Council on Foreign Relations backgrounder.

"What is really behind the riots in Northern Ireland?" episode of The Guardian's Today in Focus podcast.

"Understanding the role of European Council summits in reaching the Good Friday Agreement" blog for LSE.