10-Minute Talks: Theatre marketing and ballads in the time of Shakespeare 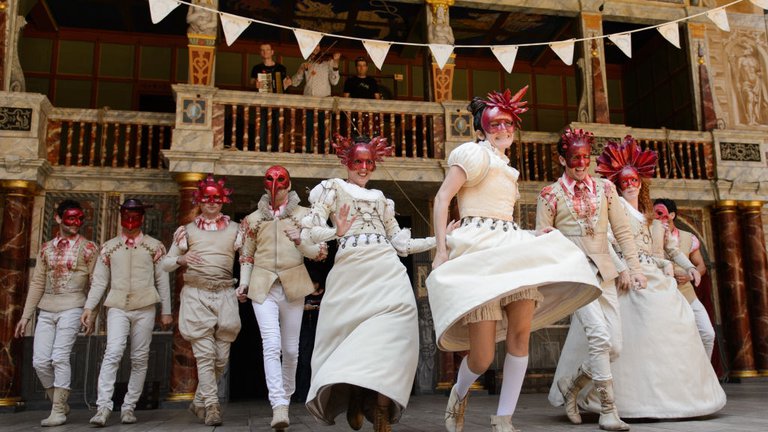 Professor Tiffany Stern FBA discusses sales of printed songtexts in Shakespeare’s London and asks whether songs performed in, about or after plays were "product placement" for theatre sales.

Hello, I'm Tiffany Stern, Fellow of the British Academy, the UK's voice for the humanities and social sciences. I'm delighted to have this opportunity to talk to you about Shakespeare and song in just 10 minutes.

I'm going to start by looking at a song. This is the song which is at the end of Shakespeare's comedy of Twelfth Night and it's sung by the clown:

"When that I was and a little tiny boy,

With hey, ho, the wind and the rain,

A foolish thing was but a toy,

For the rain it raineth every day."

It doesn't sound very jolly, and it isn't. It tells the story of the clown's life, his drunkenness, his bad marriage, with a constant refrain of wind and rain every day which, though extremely English, is not upbeat. These days, we can think of reasons why Shakespeare might have ironised his play by putting this song at the end of it. In the 18th century they had a simpler explanation for it, though: they said that the song was rubbish, that a buffoon actor had tacked it on.

I’m going to look at songs in Shakespeare's plays and I'm going to be thinking, might there be alternative, other reasons for Shakespeare using songs in his plays, which means that they needn't necessarily be relevant, though they often are?

To do this, I need to talk first about songs themselves in Shakespeare's time. If you loved singing or you loved songs, how would you acquire that music? Well, what you'd do usually is you'd listen out for a ballad-singer-seller. That's a person who sings songs, which he then sells to you – and he has them on print sheets looking rather like this:

If we have a look – you can see that there's the title to the song and under the title there is usually the name of the tune of the song. Not actual music, because music was expensive to print. Generally, you knew the tune, so there were many more ballads than there were tunes. In this particular instance, however, this ballad is to a pleasant new tune, so the only way you can get to know this is by listening to the ballad-singer-seller. You'll see the ballad also has some lovely pictures. That means you might buy ballads even if you're illiterate, because ballads were often used as wallpaper in houses.

I'm interested in this ballad in particular and I'll show you why. Let's look at the start of it:

"A poor soul sat sighing under a sycamore tree,

With his hand on his bosom his head on his knee,

Willow, Weeping Willow: it's a sad song, and it's a song about a very unhappy man – unhappy because a woman has been awful to him.

Desdemona speaks – she is very unhappy:

"My mother had a maid called Barbary,

She was in love, and he she loved proved mad,

and did forsake her. She had a song of willow."

Desdemona introduces the song. It's cross-generational – goes to her mother; cross-class – goes to the maid; possibly cross-race as well, if the Barbary maid comes from the Barbary coast of Africa, so this is a song of general women's lamentation.

"The poor soul sat singing by a sycamore tree,

Sing all a green willow.

Her hand on her bosom. Her head on her knee,

Oh, that's odd – that's the same song we saw before on the ballad sheet, only then it was about a man. Has Shakespeare taken a man's song and turned it into a woman's song? Well, possibly – would be nice if he had done, because that would mean that this utterly female song is also, at the same time, a song of Othello’s sorrow. Maybe though, he hasn't. Maybe he wrote the song first and a ballad writer has rewritten it for a man.

It's actually hard to know, because ballads are incredibly difficult to date. You can date a piece of paper with a song on it, but that doesn't mean you're dating the actual song, so we don't know which came first. What we do know is this: Shakespeare expected us, the audience, to know this song intensely well.

Desdemona sings through several verses of it, right up to this moment: "let nobody blame him, his scorn I approve." But then she corrects herself: "nay, that's not next." What is next? We seem to be asked that. If we know the song very well, we know that what's next is this: "her scorns I approve, she was born to be fair, and I die for her love."

"I die for her love" – it's proleptic. This predicts the end of the play. But how on earth can we know that unspoken line? Well, really we can only know the song this well if we are holding, say, a ballad sheet in our hands. Keep that in your head while I show you the next example.

We're now in The Tempest. Stefano and Trinculo are drunk and they're singing – not well. Ariel, who is invisible, then invisibly turns up and plays the correct tune, on a table, which is a drum and pipe. The men are astonished: "what is this same? This is the tune of our catch played by the picture of Nobody." But why doesn't Trinculo just say nobody? What does "picture of Nobody" mean? Well, I'll show you. It means this:

This is the famous picture of Nobody from the play Of Nobody and Somebody. The play has essentially one joke and it's here in the picture. The character Nobody has no body – he just has breeches that go all the way up to his neck. So famous was this picture that you could buy it separately if you didn't want the play and also its printer-publisher, John Trundle, sold at the shop by the sign of the Nobody, so that was his shop sign. Trundle sold plays and ballads. He seems to have had a little line of Nobody ballads, of which this is a descendant. Here Nobody – at the top of this ballad – gives counsel how to choose a wife. Should you take a widow or a maid? He says a widow and he shows you his ideal wife. There she is – she has no body – just skirt up to her neck.

But to go back to Shakespeare. Why is Shakespeare referring to this famous picture? Well, he seems to be doing a little bit of advertising here – he seems to be telling you that if you like Ariel’s ballad, you can get it from John Trundle. Interesting.

It features a ballad-singer-seller. He's also actually a rogue. Now everyone's excited about ballads and wants to get them: "pray now buy some: I love a ballad in print". Autolycus, the ballad-singer-seller, looks through his sheaf of printed papers: "why this is a passing merry one and goes to the tune of two maids wooing a man." So again – he tells the tune which, thank goodness, everyone on stage already knows and they then sing the ballad together. Now in the play, this is part of Autolycus’s duping of the people around him. But it does also do what ballad-singer-sellers do. It promotes and sells and reveals what the ballad is like, so it does, in fact, market the ballad to us, the audience. That makes us a) want the ballads and b) also be dupes. Again – intriguing. What is Shakespeare doing?

We need to think a little bit about where ballad singers and sellers marketed. They could do that anywhere – they didn't have to have book shops. They just had themselves, so they could stand anywhere and sell and sing. They did it in markets, fairs and look – they did it at the doors of theatre houses. Here's a reference to this: "unsufferable loitering quality in singing of ballads and songs at the doors of such houses where plays are used."

So now we can see that there are ballad-seller-singers at the door of playhouses for the queue as you go in to the play and then again as you go out of the play. That means your plays are, in fact, bracketed by ballads. If you think about it, the ballads that market the plays you're going to see or that are in the plays that you’re going to see – those are going to be particularly popular.

So if we now think about Shakespeare, why he seems to be promoting certain ballads and ballad-sellers and ballad-printers. Well, ballads are deeply connected to plays and ballads will advertise plays, if you sing them around and they'll be your mementos from plays. It's to Shakespeare's advantage, as well as to ballad singers and sellers' advantage, to co-promote one another. So, to go back to the very original question: why is there a possibly irrelevant song at the end of Twelfth Night? Well, I'm going to suggest that is Shakespeare's product placement for the ballad singers. Thank you.

Shakespeare has gone to the dogs, talk by Tiffany Stern.