10-Minute Talks: The crisis of the meritocracy - why Britain has needed more and more education 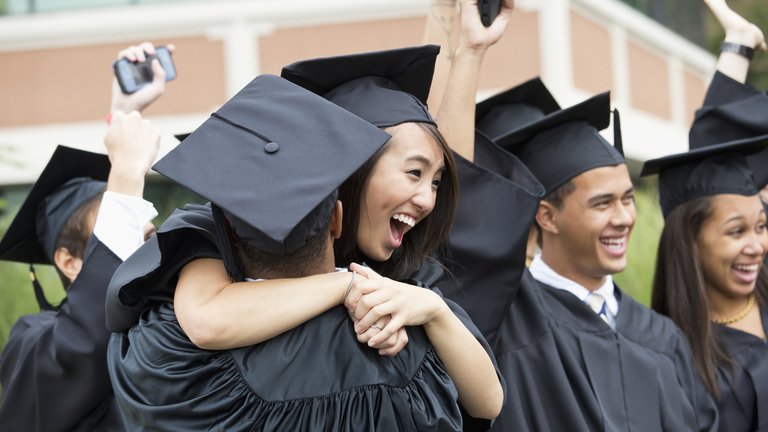 Professor Peter Mandler FBA talks about his new book 'The Crisis of the Meritocracy' and Britain's transition to mass education from WWII onwards.

Hello, my name is Peter Mandler and I’m a Fellow of the British Academy – the UK's national academy for the humanities and social sciences.

Today I am going to talk briefly about why British people have sought, and got, more and more education over the last several generations. I’m 62 years old. My parents were born in the 1920s. If they'd grown up in this country, it's very unlikely that they would have gone to secondary school. They might have stayed in school to 14, but it would have been exclusively a primary school, with a very limited curriculum and no qualifications at the end. Only about 20 per cent of the population had any experience of secondary school before the Second World War, and only one or maybe two per cent had any experience of higher education. After the wars, as part of the unfolding of the welfare state, everyone became entitled to a secondary education. More and more people began to acquire qualifications; O Levels and A Levels, in England. By the 1960s, 10 per cent were going on to higher education.

The biggest leaps forward came as recently as the 1980s. Only then was everyone eligible for an exam qualification, the new GCSE. Only then did more and more young people start going to university. Today, famously, half do.

Why has this happened? Britain's experience is not unusual. Most modern societies have equipped their young people with more and more education. I'll focus on three main drivers: social, economic and political. It is usually the economic that most analysts in the media stress. The modern economy seemingly requires a better educated labour force. But I want to show that the social and the political were equally, if not more, important. The fact is all modern societies expect much more of schooling. It's only been since the Second World War that all adults have been treated as full citizens: one person, one vote, with corresponding expectations that they tackle and absorb political choices and dilemmas. Basic literacy and numeracy is no longer enough. We want young people to know something about literature, maths, science, history, culture. Over the course of the 20th century, we've come to see that learning to live in a modern society takes time. We decided it was no longer a good idea to throw them into the workforce in their early teens or into marriage in their late teens. We invented the idea of adolescence instead to encourage young people to explore themselves and their world. Schooling was extended to ensure that they did so safely under guidance and with some structure in their life. More than that, navigating a modern society is just a very much more complex business. It involves a lot of mobility:

So young people have to learn to be flexible, and how to analyse many new situations. The social scientist James Flynn has discovered something called the Flynn effect. What the Flynn effect shows is that over the course of the last century, people's IQs have been rising on average. That is because modern life throws more challenging situations at us and we learn just from living in the modern world how to think at a higher pitch of analysis and how to express ourselves with greater sophistication. Some of that comes just from living and working in the modern world, but a lot of it has to be supplied by schooling. So, the social changes involved in modern life themselves demand later maturation and more schooling to prepare for adulthood.

One aspect of these social changes is the new demands of the workplace. That's the economic reason for more schooling. Economists have described what they call a race between education and technology. Every time there are new technologies, education has to be deepened and extended to take them on board. But even the economists who make this argument know it's not so simple. Economics is not often the direct cause of educational expansion – it's the other way around. Educational expansion often precedes technological change. Plus the specific challenges of the modern workplace are mostly met in the workplace by training and hands-on experience. What modern employers are looking for are not workers with particular skills that they've already acquired, but with generic skills: the ability to synthesise, to analyse, to think critically, to reason. They want flexible workers with high levels of intelligence and trainability. That's why employers use credentials like BTecs, A Levels or university degrees as general markers of intelligence, discipline and this trainability. That's why over three quarters of graduate job adverts don't specify a subject. The employers want graduates, not graduates in a particular subject. In other words, the economic drivers for educational expansion are a subset of the social drivers. We live in a more complex world, in the workplace and out, and education trains us to deal with it. It gets more and more complex. We need more and more education.

There's a third set of drivers too, political ones, that I want to conclude with. Here what I have to say is more specific to Britain. When you expand educational opportunity, as Britain did after the war in extending secondary education to all, who benefits most? In practice, at first, it tends to be those who are already relatively advantaged. The new system of universal secondary education after the war absorbed the existing grammar schools, which had been giving secondary education to the top 15 per cent of the population, and built new schools – secondary modern schools – for everyone else. The grammar schools gave a so-called academic education to the top 15%, who were thought to be able to benefit from it, and the secondary moderns gave a so-called practical education to the rest. It was widely understood that the academic education of the grammar schools was by definition the best. The one giving access to most opportunities: better jobs, higher education. More parents naturally wanted it for their children. Mostly already advantaged middle class parents were most successful. The grammar schools expanded to about 25 per cent of the population. But in a democracy, parents whose children couldn't get into the best schools felt cheated. Why was there one class of school for some and another, lesser, class for others? The NHS didn't operate that way – it wasn't one kind of hospital for some, a lesser kind for others. Why should universal compulsory education work that way? The argument made at the time in the 1950s, was that only the top 15 per cent, or maybe now the top 25 per cent could benefit. Only the top 15 or 25 could even attempt O Levels, the first set of school exams. But the Flynn effect showed that the argument was wrong. More and more teenagers were showing themselves capable of taking and passing exams. Secondary modern schools, which were not supposed to be even offering exams, offered them and their students passed them. So what were they doing in a non-academic school if they could benefit from an academic education? Gradually the system of separate schools broke down and by the 1960s, most local authorities had opted for a single system of so-called comprehensive schools, which, in theory, could offer an academic education and exams to all children.

This is what I call the race between education and democracy. It's not so much technology that requires more and better schooling, but democracy does. Parents see that better schooling offers better life chances, and all parents want that opportunity for their children. The same race between education and democracy that led to comprehensive schooling also led to the growth of higher education. At first, only the more privileged middle-class parents were benefiting from greater access to higher education. By the 1980s, however, more and more less privileged teenagers were passing school exams, especially after GCSEs were introduced. They wanted the same opportunity for more education and better life chances. The almost inevitable consequence was an expansion of higher education from about 15 per cent of young people in the early 80s, to 50 per cent today. A lot of people associate this expansion with Tony Blair who set the 50 per cent target, but it really began in the 1980s with Thatcher and her Education Secretary Ken Baker, who had already set a 35 per cent target. After that, the race between education and democracy did the rest. People continue to want and demand the best education for themselves and their children, just as they want and demand the best health care. I call this a crisis of the meritocracy, because democracy tends to object when the best forms of basic goods are reserved for an elite, even an elite supposedly chosen on merit.

At this point you may well be asking how long can this go on? Presumably not forever? But presumably also a good deal further.

We've just hit the 50 per cent level of participation in higher education. Korea is already at 70 per cent. The recent kerfuffle over marking A Levels by algorithm in England showed that parents and students still place a high premium on access to the best higher education and there's been another surge of more and more students into higher education this year as a result.

But I’m an historian, not a fortune teller. The story I’ve told explains why Britain has become a mass education society over just the past few generations. If you want to know more, you can read my book The Crisis of the Meritocracy: Britain's Transition to Mass Education Since the Second World War, just published a few weeks ago by Oxford University Press. Thanks for listening.

The Crisis of the Meritocracy: Britain's Transition to Mass Education since the Second World War, Peter Mandler.

The history and future of meritocracy, article in The Economist.

"Rise of the humanities" essay by Peter Mandler for aeon.