10-Minute Talks: The 1951 UN Refugee Convention: its origins and significance 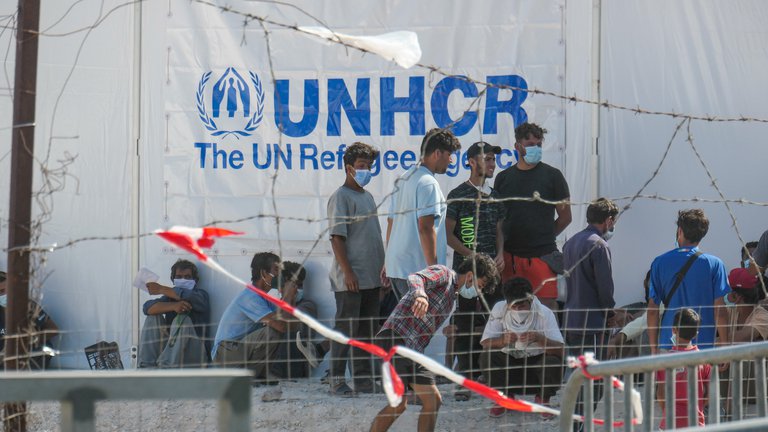 Professor Peter Gatrell FBA discusses the United Nations Convention Relating to the Status of Refugees, signed in Geneva on 28 July 1951. He explains the circumstances leading up to the Refugee Convention and considers what it was designed to achieve.

Hello. I am Professor Peter Gatrell, and I teach history at the University of Manchester where I was a founding member of the interdisciplinary Humanitarian and Conflict Response Institute. I am a Fellow of the British Academy.

Today I am going to talk about the 1951 United Nations Convention Relating to the Status of Refugees, or Refugee Convention for short. July 28, 2021 marks the 70th anniversary of the signing in Geneva of the Refugee Convention. I want to explain the circumstances leading up to the Convention and consider what it was designed to achieve.

Let me begin by outlining the main elements of the Refugee Convention. It defined a refugee as a person who "owing to a well-founded fear of being persecuted for reasons of race, religion, nationality, membership of a particular social group or political opinion, is outside the country of his nationality and is unable or, owing to such fear, is unwilling to avail himself of the protection of that country…". The importance that the Convention attached to the refugee as an individual departed from previous intergovernmental agreements dating back to the 1920s that named specific groups in need of protection, chiefly Russian and Armenian refugees.

The concept of persecution lay at the heart of the Refugee Convention. This did not represent a complete departure from international refugee law as it developed before the Second World War, but in 1951 it took on fresh meaning, in that persecution not only referred to the consequences of Nazi rule, but also covered the actions of newly installed communist governments in Eastern Europe. It is a reminder that the Cold War provided part of the backdrop.

Another core principle enshrined in Article 33 of the Refugee Convention is that of non-refoulement, which commits contracting states not to return recognised refugees to their country of origin against their will, unless on proven grounds of national security. Furthermore, under Article 31, any person who enters a contracting state illegally to claim asylum should not be punished for doing so. Other key provisions extended to basic rights such as employment, as well as housing, education and access to the legal system.

I mentioned recognition just now. The Refugee Convention stipulated that to be recognised as a refugee, the person concerned had to have been affected by events occurring in Europe before 1 January 1951. From that perspective, the Refugee Convention looked backwards rather than forwards and appeared to frame the "refugee problem" as largely a residual one, and geographically restricted at that. I shall come back to this in a moment.

The Refugee Convention emerged from a lengthy process that began in August 1949 following a decision by the UN General Assembly to establish an ad hoc drafting committee consisting of 13 government representatives charged with the task of creating a text that could be put to all member states. This committee drafted a text which was forwarded to a specially convened Conference of Plenipotentiaries, in which 26 UN member states took part. After meeting throughout July 1951, these delegates agreed on a draft Convention, which the UN Secretary General welcomed as a sign of "international cooperation". It entered into force in April 1954, and by the end of that year a dozen states had signed. With the exception of Australia and Israel, the initial signatory states were all European.

There were, however, several important areas of disagreement along the way. Soviet bloc countries did not take part in the deliberations, having already objected to the International Refugee Organisation, a body set up in 1946 to support existing refugees, including refugees from the Spanish Civil War, as well as displaced persons – men and women who had been seized from their homes in Eastern Europe to work in the Nazi war economy and who refused to return to their countries of origin that now lay behind the Iron Curtain. Soviet diplomats regarded the reference to persecution in the IRO constitution as a means of enabling war criminals to evade justice. Any new international agreement that referred to persecution was anathema from the Soviet point of view.

Among the delegates who took part in the drafting process, one issue concerned the phrase "in Europe". Some countries, including the UK and France, initially advocated a broader geographical formulation – the French delegate even spoke of "new and undreamed of refugees" – but they yielded to the US position which instead proposed taking "one constructive step at a time", a statement designed to protect the interests of what he called "receiving countries" that should not be expected to write “a blank cheque”. This position won out, with the proviso that signatories could opt out of the geographical limitation if they wished.

Another significant area of disagreement arose over the so-called colonial clause, whereby the major colonial powers, Britain, France, and Belgium would reserve the right to decide if and when to apply the Convention "to all or any of the territories for the international relations of which it is responsible". The Indian delegation to the UN General Assembly stated that it "strongly opposed the insertion of the colonial clause because it was precisely in the colonies … that violations of human rights were unfortunately most frequent". This view found support from Lebanon, Indonesia and other countries in what is now called the Global South. It was another reminder of the politically charged context in which the Refugee Convention was debated: one in which leading European powers took colonial rule for granted. Their formulation remained in the Convention, as Article 40, "the territorial application clause".

We might then ask, what else did the Refugee Convention not do? Crucially, the Convention did not speak of a "right of asylum", but rather of "the right to seek and enjoy asylum in another country", the formulation that had been adopted in the 1948 Universal Declaration of Human Rights. The Refugee Convention stipulated that each signatory state could determine whom to admit, having satisfied itself that the person concerned was eligible. It added that "reasons of a purely economic character may not be invoked." With these limitations in mind, an informed observer, speaking on behalf of non-governmental organisations, offered a withering assessment of the proceedings:

"The draft Convention had at times been in danger of appearing to the refugee like the menu at an expensive restaurant, with every course crossed out except, perhaps, the soup, and a footnote to the effect that even the soup might not be served in certain circumstances."

Another critical provision was that to be eligible, a refugee had to be "outside the country of his nationality". This meant that people who have come to be described as internally displaced persons do not qualify for recognition. This was clearly understood at the time. The Convention took no account of large numbers of people who had been torn from their homes. Beyond Europe, around 14 million Hindus, Sikhs and Muslims moved between India and Pakistan in the immediate aftermath of the Partition of India in 1947. They were deemed not to be outside the country of their nationality and were categorised as "national refugees". Without international protection, the task of supporting them fell to India and Pakistan.

Other groups, notably Palestinian refugees displaced by the war of 1948 that led to the formation of the state of Israel, likewise fell outside the terms of the Refugee Convention, but in their case the UN argued that they were supported by a dedicated organisation, the UN Relief and Works Agency in the Middle East, which remains in existence to this day.

Within Europe, the Convention excluded between 10 and 12 million ethnic Germans who had been expelled from their homes in Poland, Czechoslovakia, Hungary, and Romania as a direct result of the agreement reached by the Allies at Potsdam in 1945. The UN took the view that these expellees were the responsibility of the governments of West and East Germany, being "recognised by the competent authorities of the country of their residence as having the rights and obligations which are attached to the possession of the nationality of that country".

In this way, the Refugee Convention was both inclusive and exclusionary in terms of those to whom it extended protection.

One other important point is worth making. Several major refugee-hosting states, all of them UN member states, only signed the Refugee Convention after a long delay or never signed at all. The US did not sign until 1968 on the grounds that it reserved the right to determine through national legislation which refugees to admit. Apart from India and Pakistan, other countries that have never signed include Lebanon, Jordan and Turkey, as well as Bangladesh when it achieved independence in 1971. Many of the world’s refugees are at present living in these countries. Various reasons have been offered for their refusal to sign, including these countries’ support for refugees on a voluntary basis without the need to ratify an international convention, and their reluctance to endorse any position that might deem them to be a country of permanent settlement.

It is also worth pointing out that the US delegate argued that "the refugee problem in general would only respond to regional solution through the medium of regional conventions", and thus anticipated decisions taken by the Organisation of African Unity in 1969 (the Convention Governing the Specific Aspects of Refugee Problems in Africa), and the 1984 Cartagena Declaration endorsed by the Organisation of American States, both of which broadened the definition of a refugee in the UN Refugee Convention by referring not only to persecution but to "generalised violence, foreign aggression, internal conflicts, massive violations of human rights or other circumstances which have seriously disturbed public order."

To sum up, the 1951 Refugee Convention remains a fundamental element in international refugee law. It has also adapted over time, notably when the geographical and temporal limitations originally imposed in 1951 were eventually lifted by the New York Protocol Relating to the Status of Refugees signed in 1967. This decision was important because it suggests that with sufficient political will, there is scope to take account of new circumstances.

Is the Convention still relevant? Seventy years on, 145 countries have signed the Refugee Convention, so this suggests that it still plays a vital international role. Some critics argue that it belongs to a different age, some that it does not ensure a more equitable distribution of the global burden of supporting refugees, and others that it does not include internally displaced persons. At the time, as I have explained, it was not universal in scope, and to this day many of the world’s refugees fall outside the legal protection that the Convention provides.

All the same, I take the view that, whatever its shortcomings, it is better to have an imperfect Convention rather than none, because the prospect of international agreement to create something more comprehensive is remote. Yet the Refugee Convention is a tender plant rather than a sturdy tree. Recent legislative proposals in the UK and elsewhere in Europe suggest that its core principle of protecting and securing the basic rights of refugees can never be taken for granted. It is worth remembering that 70 years ago, serious efforts were made to define those rights that were then enshrined in international law.

The Unsettling of Europe, book by Peter Gatrell.

The Making of the Modern Refugee, book by Peter Gatrell.

A Whole Empire Walking: Refugees in Russia during World War I, book by Peter Gatrell.