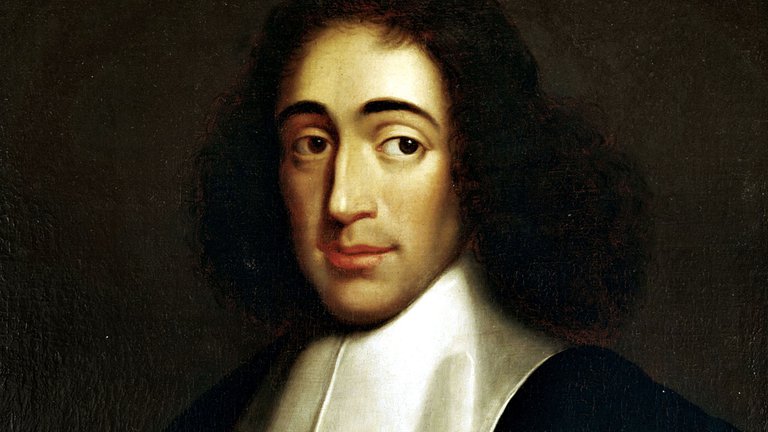 What enables us to live together peacefully and harmoniously? In this talk Susan James discusses some of Spinoza's answers to this and other philosophical questions.

My name's Susan James and I'm a Professor of Philosophy at Birkbeck College in London and a Fellow of the British Academy.

To begin with time and place, Spinoza was born in 1632 in Amsterdam. He spent his whole life in the Dutch Republic, and he only published two works while he was alive. But that didn’t prevent him from becoming celebrated across Europe as a radical, and according to some people, dangerous thinker, whose ideas challenged philosophical, religious and political orthodoxy.

Spinoza’s most systematic statement of his philosophy is laid out in a work called the Ethics; and in the first part of this book, he offers an account of the metaphysical structure of nature that has captivated generations of readers. This vision is of course one of Spinoza's greatest philosophical achievements. But the overall aim of the Ethics is not to anatomise nature, it's to tell us, to show us how to live.

Philosophy, as Spinoza sees it, is an art of living. It teaches us to live as joyfully and powerfully as human beings can.

As we study it, we do of course need to learn about nature, about the sort of world we live in. But it’s if anything more important to learn about ourselves – to find out what we are like, and to find out how to use our powers to live as satisfyingly and securely as possible.

Acquiring this understanding isn’t easy, and in the Ethics as well as in his other works, Spinoza explains why. We tend to misunderstand our nature and our relationship to the world. For example, we tend to assume that we are more capable than we are, as when we wrongly convince ourselves, Spinoza thinks, that we have free will. Equally, we tend to imagine that the world is a friendlier place than it is by shying away from the recognition that the laws of nature take no account of our interests or desires. Rather than embracing this truth, we tend to resist the knowledge that we are just finite, intensely vulnerable things, surrounded by beings who are much more powerful than we are.

Philosophy, Spinoza thinks, help us to correct our misunderstandings such as these and the destructive dispositions that go with them. It can show us, for example, that we, like everything else in nature, are beings who essentially strive to empower ourselves with all the resources at our disposal. Above all, it can show us that if we're going to manage this, if we're going to learn to live as powerfully as we can and strive most effectively, we're going to have to learn to co-operate with one another. The only way to produce securely joyful ways of life is to form communities, and use our collective resources to protect and support one another.

In Spinoza’s day, the ancient idea that philosophy is an art of living was still pretty widely shared; but since then, I think it's largely been lost. Most contemporary philosophers don’t recognise it as an account of the kind of things they do But recently, there has been a renewal of interest in this view, and here, I think, Spinoza may be able to help us. He provides us with one picture of what such a philosophy might be like, and he provokes us, in doing so, to ask how we might make it our own. At the same time, Spinoza defends some startling critical claims about the basis on which it’s possible to secure a joyful way of life. In doing that, he also jolts some of our own assumptions - he makes us reconsider what an art of living together might be like. Let me give you one illustration of this view.

As we’ve seen, we can’t assume that nature takes account of our wellbeing. More specifically, we can’t assume, as many of Spinoza’s contemporaries did, that the law of nature endows us with natural rights, for example with rights to life or liberty or property. If we take a harder look at ourselves, Spinoza says, we’ll find that the only right we possess by nature is the right to do anything that we can do, anything in our power, and in this we are on a par with everything else in nature. Just as big fish have the right to eat little fish, Spinoza says, so we have the right to do anything we can, regardless of whether we act wisely or foolishly, aggressively or cooperatively.

This interpretation of our natural right may seem so counterintuitive as to make no sense at all. For instance, natural rights, as Spinoza conceives them here, are not matched by duties or obligations. If I have a right or power to walk down the road doesn’t mean that you have a duty not to stop me. It also seems that rights have no moral content – I seem to have a right to act wickedly or indifferently as well as a right to act well. A right to exercise my liberty for example, on an equal basis with yours. Furthermore, as Spinoza emphasises, the rights we have as individuals are really extremely limited. On your own, without help from other people, there are very few things you can do, and even fewer things you can be sure of being able to do.

So perhaps this account isn’t looking very promising after all. Maybe it doesn't look like it could be a help to us in developing our own conception of philosophy as an art of living. But here’s Spinoza’s point. It’s up to us, he's saying, to distinguish the rights or powers that are morally important to us from the rights or powers that we're less concerned about. The laws of nature don't do this work for us, we have to do it for ourselves.

Equally, it’s up to us to bring the rights that we care about into existence by creating conditions in which individuals are secure in the exercise of the relevant rights of powers. If we care about having a right to liberty, then we have to work out first of all what this means –what do we want to be free to do? – and also have to work out how to secure that power - the power to freely do those particular things.

And finally, as this suggests, creating rights is not going to be, for Spinoza, just a legal process. Our powers to act as he conceives of them, depend on many relationships with other people and with other things. If these powers to act or rights are to be secure, the relationships on which they depend are going to have to be stabilised. They too will have to be secure. So rather than thinking of a right as a claim that stands on it's own – I have a right to liberty – Spinoza urges us to think of our rights as claims which are dependent on and emerge from a very complex spreading network of various kinds of powers. This is a network that we have to create and keep in place. And only in so far as we do that can we be said to posess rights.

Rights cannot just be conjured or legislated. Creating rights that contribute to our power to live joyfully and harmoniously is itself a continuing exercise, Spinoza is saying, in philosophical understanding.

Spinoza, video profile by The School of Life.

In Our Time: Spinoza, Radio 4.

"Spinoza and ‘no platforming’: Enlightenment thinker would have seen it as motivated by ambition rather than fear", article for The Conversation.

"A kind of piety: Thinking and living harmoniously together", article for TLS.