10-Minute Talks: The Shogun’s Silver Telescope: The East India Company and the English quest for Japan 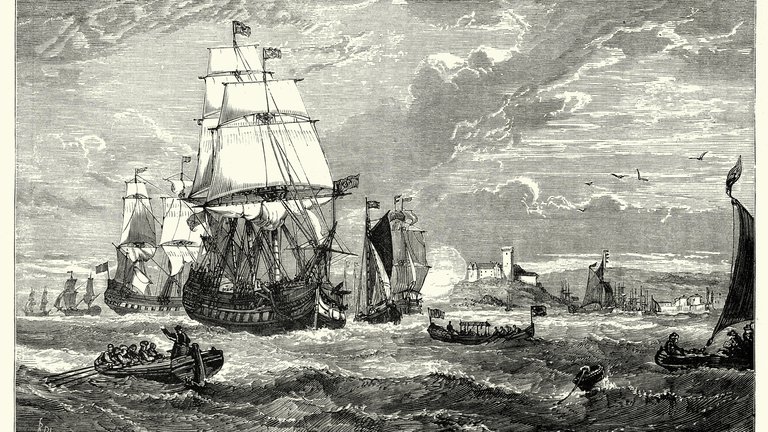 Professor Timon Screech FBA explores the relationship between the East India Company and the Shogun of Japan.

My name is Timon Screech and I teach the history of Japanese art at the University of London and SOAS. I'm here today to talk to you about some research I've conducted recently on the beginnings of the East India Company.

The East India Company would go on to play a very major – and some would say extremely deleterious – role in world history. But the period I'm looking at, from its foundation on the very last day of the year 1600 – for about the first 15 or 20 years – it was not in a powerful situation at all. It came into existence in emulation of some very successful Dutch sailings to what they still called "The Indies".

The East India Company was created to import spices, which had previously been bought in Venice (and the merchant of Venice is a figure of myth in English history). Going on from Venice you could go to Istanbul, or even as far Aleppo, to get hold of the spices nearer to the sites of production, cutting out the middlemen. Indeed, there was a group that predates the East India Company called the Turkey Company, and they did just that.

The Portuguese had discovered already, well before this time, that you could get to India, The Indies, around the Cape of Good Hope. And the English, in due course, begin to do that in a formalised way.

So this first sailing leaves in 1601, and it gets to the Cape of Good Hope and goes pretty much dead straight from there across to where they knew they could obtain spices, which is on the northern tip of Java, where there's the town of Banten. Banten was under the rule of a young boy ruler and his council, who had already admitted the Dutch and saw no objection to the English arriving. The Dutch were not so happy for the English to be there, but there's plenty of spices and there was enough to go around. The Dutch presence was not sufficiently large that they could do much about the English, even if they didn't like them.

So the Dutch and the English set up their local trading houses in what was called the Chinese part of the city, in other words the non-Muslim part of Banten, and they bought their mace and cloves and nutmeg. They also sailed up to the Port of Sumatra to the Port of Aceh where they got pepper. It was much cheaper than buying it even in Istanbul and certainly cheaper than buying it in Venice. But it was still quite a long way from the site of production, and so both the English and the Dutch developed the idea to sail on through, beyond Java, into the Banda Sea significantly further on and buy the spices at source, even possibly procure the monopoly rights to buy from local growers. The company begins doing this. This is well known and has been written about by other people.

I'm a historian of Japan and where my angle comes in is that the English have bought their spices, mostly with silver – that's what the Indonesians (as we'd call them today) were accustomed to selling things for – and the English got their silver by blagging it from Spanish plate ships coming back from the Spanish colonies in Latin America. That was perfectly legal, as long as England and Spain were at war. But Elizabeth I – who had incorporated the East India Company – died very shortly afterwards and the new king was James I of Scotland, who immediately created peace with Spain, so stealing from Spanish ships was no longer viable.

You could perfectly well buy Spanish silver and take it out to Java and buy with it there, but that interfered with the whole balance of payments. So the company starts to look for some other product with which they could buy or barter the spices and, indeed, England had one – only one – internationally acclaimed export product this time, which was woollen cloth. So the English go to sell it in Java and the Javans say, "it's about 30 degrees outside most of the time, we don't need your woollen cloth, but there is a cold country further north, so keep sailing until you get there." And that was Japan. So Japan comes in as a market for English cloth, and guess what? Japan also produces silver. And so the company considers a perfect exchange; forget Latin American silver. Japanese silver, bring it down having exchanged cloth for it, and sell it to the Javanese. That's basically the economic side of the story.

The cultural side of the story is that the English had to give the Japanese ruler – today we know he's called the Shogun but at the time the English just called him the Emperor of Japan – they better give him some spectacular present to persuade them not only that the English were better than the Dutch, but in Japan, unlike in Java, the Portuguese were there too. The English produce a telescope. It's the first telescope that was ever built to be a royal-level product, a present worth giving. It was the first telescope, as far as we know, that ever left Europe and we would like to know why it was selected, what it meant and what it meant on arrival.

Unfortunately we have very few records. The East India Company's documentation is pretty well preserved for some periods but for the period leading up to the sending of this ship to Japan, we have nothing. The Japanese side states that it received a telescope and it was a very wonderful thing. The Shogun personally thanked King James I for the gift, as he said, of "a thing I have never seen before, nor ever could have imagined would exist."

Of course, when you say telescope, early 16th century, people think immediately of Galileo and his findings. He discovered the phases of some planets. In other words, he discovered that the planets were not spherical and this had significant implications for astronomy over the course of the next years and decades. Galileo would come to grief because of this. Galileo's book was immediately sent to King James I, who had considerable academic interests. A telescope was shown to James I in spring 1609, that is documented. Then, interestingly, 1613, which was about the time the Shogun of Japan was receiving his telescope, the Lord Mayor's Show, which was conducted every year in London, the new Lord Mayor's Show, the Lord Mayor had a spectacular show, and that year one was shown to the people of London under the title of "Truth." This would raise some issues. Not everyone thought the telescope was true. Highly controversial issues about what people could see. Eventually people would question the telescope's authenticity because it challenged scripture. The scripture clearly says that the sun moves, and eventually – it didn't happen overnight, the telescope of 1609/10 is not like one we have today – but eventually we discovered and proposed and accepted that we have a heliocentric world, that it's the earth that revolves around the sun, not the sun around the earth.

That's the basics of the story, but I flesh it out in much more detail with wonderful anecdotes and people's machinations and lots of things about the English trying to embarrass the Portuguese, especially the Jesuits, who were in Japan trying to convert but also teaching astronomy and science. That is the wonderful story that I hope some of you might wish to pursue and read a bit further. Thank you for your attention.

The Shogun's Silver Telescope: God, Art, and Money in the English Quest for Japan, 1600-1625, book by Timon Screech.

Tokyo Before Tokyo: Power and Magic in the Shogun's City of Edo, book by Timon Screech.