10-Minute Talks: In praise of Queen Astrid of Norway 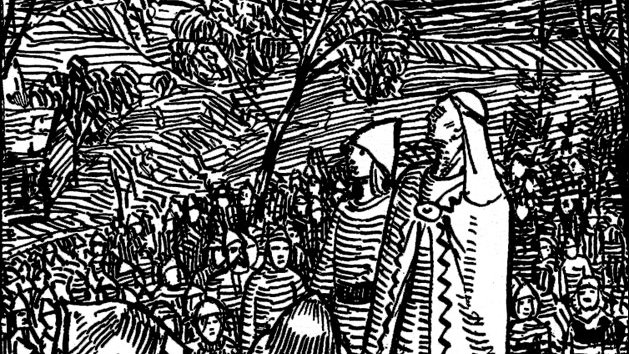 Professor Judith Jesch FBA introduces Astrid, a Swedish princess married to King, later Saint, Olaf of Norway and her remarkable political intervention to ensure that her stepson succeeded to the throne in 1035 CE.

Hello, I am Judith Jesch. I'm Professor of Viking Studies at the University of Nottingham and I'm a Fellow of the British Academy, the UK’s voice for humanities and the social sciences.

I want to tell you about Queen Astrid of Norway. She was the wife and widow of Scandinavia’s first royal saint, St Olaf and she interests me because early in the 11th century she was the recipient of an extraordinary poem praising her activism and political skills in a genre that was otherwise reserved for male recipients, a genre that we call skaldic poetry.

Skaldic poetry interests me as a potential contemporary source for the Viking Age, even though the poems were only written down 200 or 300 years later when the Icelandic saga authors incorporated them in their texts. But the complex metrical system and the complex diction of these poems suggest an oral genre that was designed to be remembered accurately in an oral tradition and therefore I think do reflect Viking Age events and attitudes. The poems can be attached to known historical figures and therefore associated with particular historical moments.

In this genre, women are mainly notable by their absence. The poems are often conventional praise of rulers, telling us of their journeys, their battles on land and sea, their political struggles, and their generosity to the poet. The poets themselves were eyewitnesses to these events and the poems were declaimed in front of the king and his court.

The one exception in this overwhelmingly masculine genre is a poem that has fascinated me for thirty years, the poem on Queen Astrid by the Icelandic poet Sigvatr Thordarson.

Olaf and Astrid had only one child, a daughter. But as is the way of Kings, King Olaf had an illegitimate son, called Magnus – this very Scandinavian name was given to him first by his godfather, the poet Sigvatr, in honour of Charlemagne, who was known as Carolus Magnus in Latin and Sigvatr is the poet who composed about Astrid.

Magnus grew up in exile because of the turbulent times in Norway during his childhood. This turbulence led to the death of his father Olaf in the battle of Stiklestad in 1030, in which he was killed by his internal enemies. Olaf's death was recognised as a martyrdom and he very soon became Scandinavia’s first royal saint. Some years later, in 1035, the supporters of Olaf managed to bring Magnus back from exile and intended to place him on the throne to restore the dynasty.

And this is where Astrid comes in. She too had been in exile in her home country of Sweden. She clearly saw some advantage to herself in her step-son becoming king of Norway. I like to think she identified with him, as they were both the illegitimate offspring of Scandinavian kings. The story is told in Heimskringla, a history of the kings of Norway written some time in the middle of the 13th century by the Icelandic author Snorri Sturluson. Snorri recounts that Astrid called an assembly in Sweden at which she mobilised a large Swedish army, which was then able to aid Magnus in ascending to his father’s throne and becoming the youngest ever king of Norway. And he needed this help because he was only about 10 years old at this time, so he wasn't able to fight his way to the top, as most of his predecessors had done. So this is where Sigvatr’s poem of praise for Queen Astrid comes in.

Sigvatr was an Icelander who'd established himself as a close friend and favourite poet of the Norway King, King Olaf. He composed a number of poems in praise of Olaf, both during his career and posthumously. I have a particular affinity with Sigvatr, because I edited a large number of his poems for the skaldic project. This is an ongoing project to produce a complete corpus of all skaldic poetry. Sigvatr is one of my favourite poets partly because of the clarity of his diction in a genre that can be obfuscatory. Sigvatr was also, as I've said, the godfather of Magnus, so he clearly took an interest in his welfare and career.

In the poem on Queen Astrid, Sigvatr expresses his joy that Magnus has become king of Norway, but he also heaps some rather extraordinary praise on the queen. She's not praised for any queenly qualities. The praise is couched in the language that's normally used of male rulers.

First of all Sigvatr notes that his poem is intended to repay the queen for the many bright treasures she has given him – rulers were expected to be generous, and poets often mentioned this generosity in their praise by way of hinting that they expected further generosity. Sigvatr then goes on to describe how Astrid proclaimed the cause of Magnus before a massive army of Swedes at this assembly or "thing". These "things" were generally masculine affairs. Men met at these assemblies to make laws, to prosecute cases, to generally politicise. Women did attend, but it was not normal for women to participate in these activities or indeed certainly not to speak at the assembly. So this is the unusual aspect of Astrid's actions for which Sigvatr is praising her. He stresses the fact that she spoke. He calls it a bold deed. He mentions her decisiveness twice. There's even a strong hint in the poem that she was acting in he way that normally only a man could be expected to act. The result of this was that she was the main reason, according to the poet, that Magnus was able to take up the throne and acquire his "broad realm".

As well as stressing her political skills, the poet also adds a touch of saintliness to her actions. The 11th-century rulers of Scandinavia were relatively new Christians, who needed the support of the expanding Christian church, to legitimatise and justify their right to rule. Sigvatr does this by saying that Astrid’s actions were carried out together with the "mighty Christ".

The poem was no doubt composed out of Sigvatr’s affection and admiration for the queen. He was a poetic innovator, so it's no surprise to me that he was the first poet to think of using this genre of praise of rulers to praise a queen rather than a male ruler. But Sigvatr was also a counsellor to the young king, and we can imagine that the poem, declaimed at court in front of the both the queen and the young king was intended to educate Magnus. Magnus needed to be reminded that he owed his position to his stepmother. As Sigvatr says, "generous Magnús has Ástríðr to repay for her bold deed ... She, a deeply decisive woman, has helped her stepson in such a way as few others would." Then he ends the poem with "I make true words to the lady’s glory." And it's these true words of the Icelandic poet that ensure that we still know today about this remarkable queen of Norway.

The Scandinavians from the Vendel Period to the Tenth Century: 5: An Ethnographic Perspective - Studies in Historical Archaeoethnology, book by Judith Jesch.

The Viking Diaspora - The Medieval World, book by Judith Jesch.