10-Minute Talks: The power of stories and the practice of rhetoric 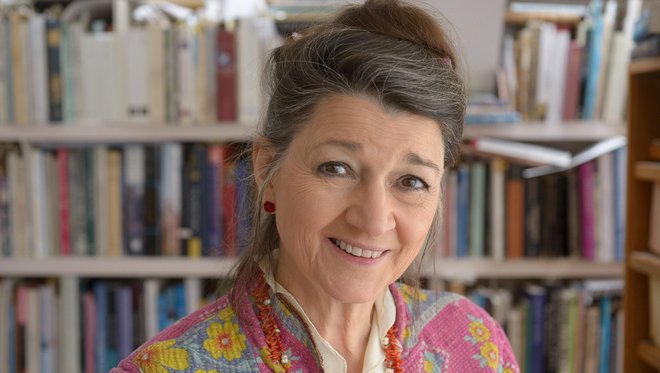 To mark World Book Day, Professor Marina Warner FBA argues that in an era of public disinformation, the study of the uses of rhetoric, as deployed in many forms of literature, is urgently needed.

My name is Marina Warner and I am Professor of English and Creative Writing at Birkbeck College University of London. I'm a Fellow of the British Academy.

Tomorrow is World Book Day and this year’s theme is "to share a million stories." In pre-COVID times, children would go to school dressed up as their favourite characters – I know that in my family today’s choice would be the Owl and the Pussy-Cat. But books aren’t only works of imagination, of course. They include your car manual, maps and primers, dictionaries and instructions on how to set the clock on your new gas cooker. However, as you’ll have already noticed from this list, the internet is replacing this kind of book: no more tattered large atlases on the back seat of the car, no more telephone directories, and – though the sale of cookery books flourishes – fewer stained recipes propped up against the kettle in the kitchen. Books as objects in the hand have predominantly become vehicles of literature: poetry, fiction, biography, memoir. Though again, not only. Reading online and downloading articles from vast archival depositories like JSTOR are increasingly the means to written knowledge and a lifeline during periods of lockdown, for those of us well-heeled and well-placed enough to have digital access and tools.

The intense pleasure of silent reading, which Proust describes as "the fertile miracle of a communication effected in solitude", still remains. But the internet has also changed the reception of literature. Oral transmission has returned, very strongly – in the global diffusion of writers’ readings, lectures and interviews on video and of spoken word events on YouTube and other platforms and podcasts – like this one.

Earlier this month, I spent four and a half intense days alone in a soundproofed padded cell, with a sound engineer on the other side of a glass wall: I had been asked to read my most recent book aloud for an audio version. The process reminded me how profoundly the patterns of speech and rhythms of storytelling still matter to words on the page. For most of human history, literature was sounded: acoustic, oral and performed, even when the material was written down. Poems were songs, plays were recited, the choruses intoned and bards narrated epics to the strumming of a lyre or a harp. The vigour of mass media communications means we have re-entered the era when a book is the repository of the work, but the work itself has to be live, kinetic, voiced. For this reason, it is excellent news that a newly named discipline, "acoustic humanities", involving listening to the role of sound in the making and reception of literature is attracting younger scholars.

But the argument I want to put today concerns the live power of words and stories and the need to attend to it, as one would care for a garden, or a fire in the hearth, or a precious water supply. Narratives in books are powerful, and it is worth pausing here to assess what that means. There was a time when the power of literature was acknowledged – to widespread alarm. Books would do harm, corrupt and mislead readers: even the Bible wasn't translated for common people to read. The enslaved peoples were to remain illiterate; and young women were also especially vulnerable to wrong ideas they might get from novels. A connection between stories, values and consequences was understood and led to repression. The protests ring down the decades, from at least the l8th century, as the professor of French, Catriona Seth has chronicled with great wit and erudition. Whereas now, as World Book Day proclaims, the good of books and stories and the vital importance to children and young people of reading are strenuously and unconditionally promoted, by contrast with the hubbub on the internet, which is widely decried as misleading and malicious, doing untold damage.

I am not making common cause with those oppressors and moralists and killjoys who in the past preferred to keep the populace illiterate nor do I want to defend the internet and social media wholeheartedly. But I want to remember that books have often been the agents of harm, lies and falsehoods: our era’s worst excesses have precursors in the Malleus Maleficarum, that 15th century handbook of witch hunters and in the Protocols of the Elders of Zion, which influenced Hitler’s murderous fantasies. When Virgil in the Aeneid evokes Rumour on the rampage, he could be describing the internet: this is in Shadi Bartsch’s much praised recent translation:

"Rumour rears to the skies,

her feet still on the ground, her head hidden in clouds.

… She’s fast of foot and fleet of wing, a huge

horrific monster. Under all her feathers lurk

(amazingly) as many watching eyes and tongues,

as many talking mouths and pricked-up ears…

of fiction and perversity as truth."

Sounds familiar? Over two thousand years ago, the Roman poet seems to be foreseeing the spread of disinformation today.

Words can have and do have malignant designs on us and the culture wars of our time stage competing stories. Literature and imagination, action and reality interact through narratives and it’s a melancholy fact that how convincingly they are told matters more to their effect than what they say. Above all, it also matters how we listen to them, how we understand and appraise them. It seems that on social media the louder the noise, the more amplified the emotions, the more purchase – popularity – the stories gain.

Between stories that open minds and stories that close them, rhetoric – or the storytelling voice – has an important role. Rhetoric used to be one of the seven liberal arts: alongside grammar and logic, it was the third pillar of the trivium. Rhetors were speechmakers, teachers, orators, creators of literature – storytellers. Their skill with language, its modes, imagery, traditions – such as proverbs and quotations from authorities and all the possible figures of speech, flourishes and inventions – was as appreciated as the mathematicians’ understanding of theorems. Rhetoric was a supremely practical art and those proficient in it went far: St Augustine was a rhetor, so was the author of The Golden Ass, Apuleius, he defended himself successfully against a charge of witchcraft. Shakespeare’s grammar school taught him rhetoric and it shows in the pleas of Portia, the arguments of Isabella, as well as the duplicities of Iago and the rallying speeches of Brutus.

Today, rhetoric does surface in some creative writing courses but it has largely fallen into disrepair as an art and a practice – except, and this is the danger zone, it is thriving in the techniques of advertising and marketing, which pay for the internet and its supposed free access and information. Advertising and data mining govern the platforms’ structures and their powerful manipulations remain largely hidden from view under that pop-up request, "accept cookies". We are no longer cast as readers of stories, but as digital consumers; we are the passive and largely heedless targets of others’ highly developed rhetoric. You – we – need urgently to be better defended. To be the rhetors now.

The current general attitude of educational policy, that the arts and humanities are non-essential and STEM subjects must take precedence in planning and investment, has forgotten the power of words and their relations to thinking and diagnostics, to imagining alternatives, possibilities and above all to antidotes to deception and lies. Learning rhetoric, through reading and exploring literary uses in all their variety, does not only develop expressiveness, it also sharpens our wits on the receiving end, our epistemic vigilance. It can help to understand what is being communicated, and weigh judgements in response: clever falsehoods and their harmful persuasions can be seen through, evaluated – and deflated. It is interesting that some of the most ancient stories in the world – the animal fables attributed to a Greek slave called Aesop – pass on this kind of savviness through comic-ironic tales that show up the hypocrisies of bullies, cheats and tyrants. By neglecting this essential training in epistemic vigilance, stories and rumours circulating in the public sphere will continue to undermine collective trust, leading, for example, to disastrous suspiciousness about a life-saving remedy such as the coronavirus vaccine. Stories can act to inoculate audiences against harm and hatred: think of the role writers have played in changing attitudes to political emancipation for enslaved and subjugated peoples.

The slur of "fake news" has undermined confidence in fictions, it seems to me. Many constituencies in society who prize truth-telling, who wish, to quote Wallace Stevens’ beautiful phrase, to live on "the bread of faithful speech", are losing their nerve about making up stories – the ancient, literary and oral art of storytelling. I would except from this many writers of stories written for children and visionary creators of speculative fiction, such as Margaret Atwood, Ursula Le Guin and China Miéville. But it is significant that younger readers have become, for a long while now, the main audience for literature as dream work, as imaginative fabulism – as if the struggle can’t be pursued at an adult level because "the best lack all conviction" and tolerance and equality imply a kind of rhetorical reticence, as if that bread of faithful speech will get tainted like its enemies if it sets out to arouse and convince. But arousal is only one rhetorical mode. There are many, many others.

I believe that counter narratives in all their variety are needed, stories as potent in their rhetoric as the demagogues’ tweets and the internet’s scams, that among those million stories celebrated on World Book Day they do exist and are also in the making.

I would like to see drop-in hubs – public libraries, maybe empty high-street shops – where a writer-storyteller could be on hand, somewhat like a village scribe in the past to welcome anyone who wants to share a story, from fantasy or experience. The process would offer a variation on mass observation, which set out to make a record of ordinary lives. But this project for today would lay the stress on imagination and live exchange, in order to build together a common fund of alternative stories to that internet noise, a counter-rhetoric to suspicion and hostility.

Some stories foment blame and grudge and grievance, but others sustain inquiry, judiciousness, subtlety, humour. With sharpened ears and tongues, we can mock, too and uncover falsehoods and self-interest by means of satire and parody and irony – all well-tried modes of rhetoric. Of course, there are many, many poets and writers and comedians who are making up stories in this spirit of truth-telling: at the start of the lockdown lots of funny, rueful and ingenious squibs circulated. Such tales act like a spiritual vaccine, building up collective immunity to disinformation and dark despair.

Once Upon a Time: A Short History of Fairy Tale, book by Marina Warner.

"How fairytales grew up", article for The Guardian by Marina Warner.

"Marina Warner: 'I’ve always found it very hard to know what I’m like'", interview in the New Statesman with Marina Warner.