10-Minute Talks: The nature of friendship 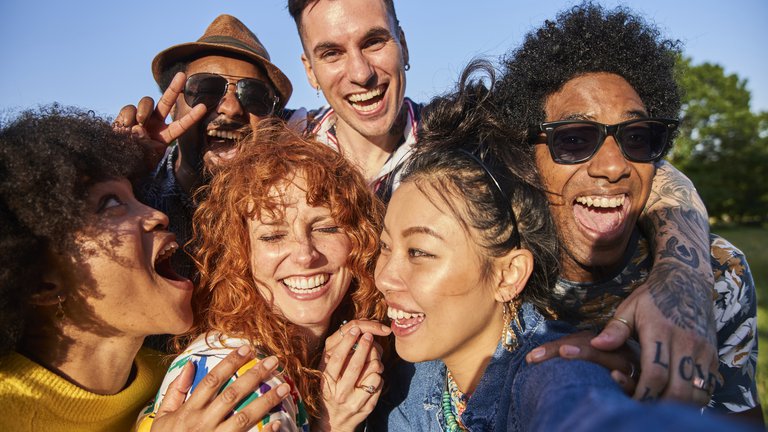 In this talk, Professor Robin Dunbar FBA discusses what friendship is and why it is important for our psychological and physical health.

I'm Robin Dunbar. I'm Professor of Evolutionary Psychology at the University of Oxford. I'm a Fellow of the British Academy, the national academy for the humanities and the social sciences. I'd like to talk today about something that's near and dear to all of us, and that's the nature of friendship.

What is it to be friends with someone? Why do we have friends? What do they do for us?

In fact, I actually spent the first half of my research career studying the behaviour of monkeys in the wild, in Africa. I think anybody who has spent any time abroad studying the behaviour of monkeys and apes comes away really impressed by the sheer complexity of their societies. They're much more complex than anything we see in other mammals or even in birds. In addition to that, it's clear that the relationships they have with each other are something like what in humans we would refer to as friendships. So eventually – inevitably perhaps – I began to wonder how what I was observing in these monkeys translated across to our own species, to humans. So eventually I became interested in the nature of human friendships and the nature of human communities.

But let me begin first by convincing you, if you needed any convincing, that friendships are good for you. Let me give you the evidence for their health benefits because these are really quite surprising. They caught us left field completely. We really didn't anticipate them. It's only within the last 10 or 15 years that we've known about them and realised how important they actually are. It turns out that the single-most-important factor that predicts your psychological health and wellbeing, your physical health and wellbeing, even how long you live, is the number and quality of close friendships that you have. You might suppose, that that being so, the more friends you have the better. Up to a point that is true. But there's no way you can have an infinite number of friends and therefore live forever. The number of friends we have is really constrained by two key things. One is our psychological ability to handle relationships and to manage them, and the other is time.

So let me explain. I became aware of the psychological or cognitive constraints on the number of relationships we can have many years ago when I was trying to understand what determined the size of monkey and ape social groups. I discovered that if you plot the typical size of a species' social group against the size of its brain, you got a very nice relationship. Species that live in big social groups have big brains. That's because primate societies are very complex and they need a very large computer (in other words, a brain) to handle and manage all the relationships involved. And that's because it's not just that they're dealing with a relationship with somebody else, but also with that individual's relationships with all the other members of the group. So it's trying to integrate this spider's web of relationships between all the members of the local group that causes the complexity and requires all this computing power. This relationship is generally known as the social brain hypothesis and it occurred to me that we should be able to predict the natural size of human groups off the back of the equation for this relationship in primates. When I did that, I came up with the predicted group size for humans of 150. This is the number now known as Dunbar's number. It struck me at the time that this was implausibly small. Surely we live in these huge mega cities, so why is this number so small? But once I started to look for evidence on the size of communities of hunter-gathers and the size of social networks – the number of friends and families we have as individuals – there was the figure of 150.

That’s a cognitive limit on the number of people that we can maintain as friends and family at any one time. The other issue is the time we have to invest in those relationships, to make them work in the way we want them to work. The way we want them to work is for these people to come to our help when we need it, to pick us up when our world falls apart and to put us back on the right path. People's willingness to do that depends primarily on the time you invest in them. This is true both of monkeys and humans.

If you look at how people invest their time in their different relationships within their 150 social world, what you find is a series of layers where a very small inner core gets a very high proportion of your time and effort.

It doesn't matter whether you measure that in face-to-face interactions, or in how frequently you phone people, or even in how often you post named posts to them on something like Facebook. That inner core – and it numbers about five relationships – gets about 40% of your total social effort; and then in addition the next 10 people further out get another 20%. Those 15 people who are closest to you get 60% of your total social effort. These are the ones that really matter. That inner core of five are the ones that really affect your health and wellbeing and longevity and so on. They are what I call the "shoulders to cry on" friends, the people who will drop everything and come to your aid when your world falls apart. The wider group of 15 are really the core of your social world. They buffer you against the general stresses of life and living in social groups.

The quality of our friendships within those layers also depends on something else that's purely cultural. This is because of the striking tendency for our friends to resemble us in all sorts of ways. This is known as homophily, “the love of the same,” if you like, or “birds of a feather that flock together”. It turns out that we select our friends – and even our preferred family members – on the basis of how much we share in common with them.

What these seven pillars seem to do is point back to a small community, particularly the small community in which we grew up, but to some extent they do change through life as a consequence of the communities you live in. What's important about these seven pillars is that they are cultural, so they're a way of identifying the people who you know and understand and feel closely engaged with. They're the people you can trust, because you understand how they think. These seven pillars are the cues that allow you to identify, in a very fast and furious way, who belongs to your community and who doesn't. Interestingly enough, common musical tastes turn out to be much the predictor for how likely a stranger is to be a good friend. If you share the same musical taste, that suddenly makes you a “band of brothers” as it were.

That's a little bit about the nature of friendship. Of course, friendship has been in very short supply this last year or so due to the fact that our ways of interacting with our friends and family have been rather restricted thanks to COVID and lockdown. We'll want to get out and renew those things. One of the interesting things about friendships is that they're actually incredibly dynamic. People are constantly changing place, changing layer in our friendship circles and so we can expect that some of these relationships will have changed: some will have dropped down to lower levels and new ones will have come into replace them, and that's a perfectly normal feature of the nature of friendships.

"You Can Only Maintain So Many Close Friendships", Robin Dunbar for The Atlantic.

"Friends by Robin Dunbar review – how important are your pals?" article in The Guardian.

"The Limits of Friendship", article in The New Yorker.

"The hidden rules that determine which friendships matter to us" article by Robin Dunbar in the New Scientist.