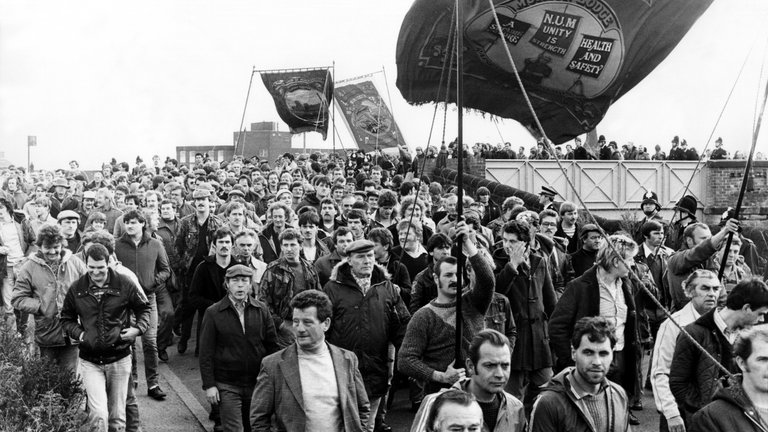 Professor Robert Gildea FBA examines the 1984-85 miners’ strike through the lenses of class, community and family.

Hello. My name is Robert Gildea and I'm Professor Emeritus of Modern History at the University of Oxford and I'm a Fellow of the British Academy. Today I'm going to talk about the miners' strike of 1984-5.

I've been a historian of France for 40 years. I always thought that British history was in black and white, and European history was in glorious technicolour. The history of France in particular attracted me because it seemed to be about revolution, resistance, rebellion. But also about provincial France, la France profonde. Then I thought one day why don't I apply this Britain? Why don't I look at something like the miners' strike, where you can study resistance and rebellion, if not revolution, and also look at provincial Britain, the Britain of the coalfields, la Grande Bretagne profonde, if you like.

It was the last great battle of the organised industrial class, of which the miners were the heroic vanguard.

They were fighting to save their jobs against an aggressive policy of pit closures which was designed to break the miners' union, the N.U.M. The miners were portrayed as the enemy within, and the full force of the police, the judiciary and the media was used to defeat them. Many miners finished up in prison or lost their jobs. The miners' strike could also be seen as the beginning of the end of industrial Britain, the Britain of the Industrial Revolution, because the strike led to the closure of many pits as the government intended. It led to the redundancy of miners and it led to the hollowing out of mining communities. And this has played into accounts that have linked so called "left-behind regions" to the fact that many of the regions voted leave in the referendum campaign of 2016. But maybe there's a third story, that's not just about defeat and deindustrialisation, but a more positive story about how miners and their families reinvented themselves during and after the strike.

For this study I adopt three lenses: the lens of class, the lens of community, and the lens of family. Class, because, as I said before, the miners were seen to be the vanguard of the organised working class. They were, after all, the bringers of coal, which fuelled the industrial revolution. They were pitted against the elements of earth, air, fire water, they were constantly at risk of death from earth falls, explosions, floods, mechanical accidents, and also long-term lung disease. They were bound by comradery. They looked after each other underground, and they socialised above ground, drinking, playing rugby or football, womanising. Their labour was well organised to defend their wages, their jobs and their pensions, and to secure compensation in the event of injury or accident or illness. Their ultimate weapon was the strike. Solidarity was based on the slogan, the mandate, the principle that one should never cross a picket line, one should never break a strike.

In terms of community, we have to look at the pit village. Pit villages were always away from big town centres, or that's where the pit was found, or it could be the mining village where the miners lived, although they travelled to other pits after their own pits closed and many were doing so from the 1960s. The Miners' Welfare was a wonderful institution that existed at the centre of the mining village. It provided trade union meeting rooms, a library, a games' hall, a reading room and space for entertainment. The community was very often seen to be self-policing. Women and children were kept on the safe and narrow. These villages were very often described by people who lived in them as self-policing. They were described as close-knit. Even that close-knit element could be also quite oppressive.

If we look at families, mining was very often an occupation that was passed down from father to son. Many ex-miners said "my father didn't want me to go down the pit." But they had limited opportunities. They very often failed the 11-plus, which was designed to reproduce the existing class system. They finished up either in the factory or the pit.

They had a very important kind of masculinity. This was based on their ability as a breadwinner to earn a family wage, a wage that would keep the whole family going. It was based on their ability to defend that by strike action, and they were able to exercise authority over the women in the family. There was quite a lot of promiscuity in some mining families. They tended to get pregnant at a young age and then get married. The obligation was always on the boy to marry the girl in that position. After marriage the women tended to stay home, but increasingly some of them worked in factories or shops or, if they passed the 11-plus, in schools and offices.

The miners' strike was not a national strike. There was no national ballot on strike action. That was one of the big issues. The action was really a series of strikes in different coal fields, which had their own traditions and identities. The South Yorkshire Coalfield, for example, was the first to come out on strike, challenging other coal fields to follow. The Scottish coalfields were quite militant. The South Wales Coalfield was initially reluctant, because the year before it had been let down by Yorkshire when it – South Wales – came out on strike. County Durham, havered but came out. Nottinghamshire was split. Most miners in Nottinghamshire insisted on a national ballot and were hostile to what they saw as the invasion from other pickets who had come to picket them out. In Nottinghamshire a minority were on strike, the majority were opposed.

During the strike you see a shift from class struggle to community struggle. The strike was orchestrated by the N.U.M., the miners' union, which sent miners to picket the pitss of Nottinghamshire and other places where the miners were still working. They were also sent to picket ports to prevent the import of coal for energy, although the government had cleverly stockpiled immense amounts of coal before provoking the strike. But after a month or two it became clear the strike was going to be long. Support groups were set up to raise funds, organise soup kitchens, provide food parcels for striking families.

This meant a greater role for women, who looked to feed their families, and to defend their husbands' jobs, on which the communities depended. One of the slogans that came out during the strike was "close a pit, kill a community." Important connections were made between mining communities and other trade unions, such as the printers and local government workers, but a good number of unions gave them the cold shoulder. So activist groups were also contacted, such as the Greenham Common women, and as you will know if you've seen the film Pride, important contacts were made between the South Wales Miners and the Lesbians and Gays Support the Miners group in London and elsewhere. Increasingly, links were made with trade unions abroad: Germany, France, Italy, Denmark, Sweden, the United States, in order to raise money.

Families and gender are very important in my study. The strikes were a performance of masculinity. The strikes turned the miners from heroic underground workers to heroic flying pickets. It was also one of those famous crises of masculinity. The miners were no longer breadwinners. They didn't have a wage coming in. They were fighting a losing battle against the police – you've all seen the famous pictures of the T-shirted men being chased by the Cavalry at Orgreave in June 1984. They saw themselves as no longer in control of their women. The women who wanted to defend their husbands' jobs, who wanted to defend their families, came out to get involved themselves: raising money, organising food parcels, but also standing on picket lines themselves because increasingly the men were being arrested, or threatened with the sack if they picketed.

Was this feminism, or was this a form of matriarchy that you might see in working class communities? How will we ever know? Well one way to find out is to ask them, and this is why this is an oral history project. What I wanted to know was what the strike meant to the men, women and children who were involved in the strike as they look back on it today. This has to be done by placing it in the context of their lives as a whole. What I use in my work is what is called life history interviews. I ask about their family origin, their schooling, relationships, marriage, ambitions and occupations, what they did during the strike and then what they did after the strike. What I'm interested in is how far men and women were destroyed by the strike, but how far they were able to reinvent themselves through education, pursuing different careers – many went into careers like social work or probation work or teaching. They took up other forms of activism. Some became local councillors, some even became MPs. So this is a book which will hopefully see the light in time for the 40th anniversary of the strike in 2023, and will be archived at the British Library. Thank you.

Fighters in the Shadows: A New History of the French Resistance, book by Robert Gildea.

"Miners' strike 30 years on: 'I fought not just for “my pit” but for the community'", article in The Guardian.