10-Minute Talks: The history of Belfast, a strange case of shared identity and sectarian division 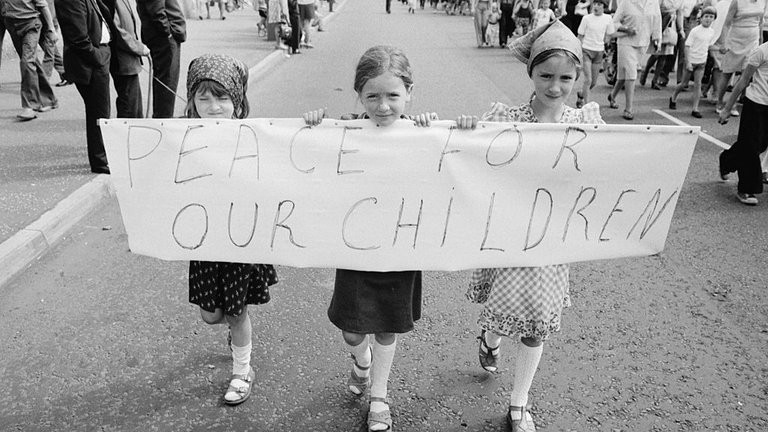 Professor Marianne Elliott FBA reflects on the existence and history of a "shared space" Belfast identity. This talk is part of the Imagine! Belfast Festival of Ideas and Politics 2021.

Hello everybody. This talk is part of the Imagine! Belfast festival, and I'm very happy to be with you today. I'm Marianne Elliott, I'm Professor Emerita at the Institute of Irish Studies in Liverpool University and also a Fellow of the British Academy.

Back in a 1967 interview, Belfast artist Colin Middleton told poet Michael Longley: "place is everything…when you get there you know you belong, you know you’re kith and kin."

I still regard Belfast as home – even though I left it as a student in the 1970s – and increasingly it dominates my research interests. I grew up in the historically mixed-religion north of the city and watched in dismay as it disintegrated into a patch-work of sectarian spaces and, long after the Good Friday Agreement, competing paramilitarism. Even so, that shared pride of place has not disappeared and unites around the very special geography of the area, hollowed out between the surrounding Antrim plateau – with its iconic Cave Hill – and Belfast Lough.

Belfast people possess a kind of anguished, defensive identity, much the same as I encountered in my many years of working in Liverpool. But Belfast city centre has always been a shared space and "shopping" a very Belfastian leisure activity. It will be lamentable if internet shopping and the closure of major high street stores destroys this particular shared space, such a uniting force in Belfast’s history.

Sectarian space, however, is inbuilt in that history. Belfast was a Protestant town, Catholics only arriving in significant numbers in the 19th century. The famed radicalism of the 1790s could only happen because a dominant Protestant identity was as yet unchallenged. Though still very much a minority, the increasing numbers of Catholics arriving in the 19th century to help stock Belfast’s industrialisation led to the successive sectarian riots by which Belfast became branded, exploding in particularly spectacular fashion in the years 1920-21, around the time of partition. Each added to the sectarian refashioning of the Belfast urban landscape, prefiguring the massive population shift into single-religion areas at the beginning of the recent Troubles. But even then, those from mixed-religion areas remembered the shared neighbourhood ethos, the friendships developed there and the shared history.

It is fashionable to dismiss the positive memories of the interlude between the end of World War Two in 1945 and the outbreak of the Troubles in 1969 when such shared housing estates were built.

There is of course a danger of rosy memories of bygone days masking the reality of underlying sectarianism. However, there really is a different feel about 1950s Belfast. "We had been through a terrible war", a 90-year-old woman from north Belfast told me when I was researching my 2017 history of shared space there, Hearthlands. Indeed, the north Belfast area that I was researching was particularly badly hit by the German air-raids of 1941, which destroyed or damaged half the city’s housing stock. The animals of Belfast most prized shared-space at Bellevue and the zoo were shot in the middle of the Blitz for fear dangerous animals escaping.

Post-war, however, Bellevue revived to become Belfast’s most important shared space, second only to the city centre – fleets of trams and trolley-buses would transport thousands, particularly every weekend, some 60,000 turning up on Easter Monday 1959 alone. In times when few people had television sets, every national or local celebration saw Belfast people thronging to party in the streets and squares of the city centre. There was a rush to acquire neon lighting after the wartime ban was finally lifted in 1949. 45 cinemas and 111 public dance-halls serviced a star-struck population (after their experience of American culture introduced by the 300,000 US service personnel stationed in Northern Ireland during the war – indeed in the 1950s visiting reporters said Belfast people had even acquired an American twang). Book borrowing from the recently blitzed Belfast’s Central Library almost doubled to nearly 2,500,000 by 1958.

The Blitz and the need to rehouse returning service men and women prompted a previously negligent government to launch a long-overdue building programme, foregrounding modern shared working-class estates. Working-class Protestants had always been told by Unionist leaders that they were better off than Catholics and so indeed they were in terms of employment. But in housing they were not. There were just as many slums in the Shankill as in the Falls districts. Northern Ireland’s first ever housing report of 1944 estimated an immediate need for 100,000 new-build houses. A new body, the Northern Ireland Housing Trust was established in 1945 to build model estates in leafy areas on the city’s outskirts. Belfast Corporation, long the laggard in building houses being nagged to catch up with the trust. Nor was Protestant working class health any better. The arrival of the welfare state transformed Belfast working-class life, the 1947 Education Act opened up free education until the age of 15. The Catholic minority became more secure about actually belonging in the Northern Ireland state and an attempt by the IRA to revive its armed campaign against that state collapsed in 1962 because of lack of support from the Catholic community.

However, rising expectations among Catholics, generated by the post-war golden age, produced the Civil Rights movement with its core demands to be given full rights of "belonging" as "British" subjects. However deprived they actually were and are in reality, Protestant working class people had been nurtured on a culture which depicted Catholics as inferior and insidious. The sight of Catholic university students marching was particularly unsettling and demanding rights to be treated as equals. The "golden age" had not lasted long. Today sharing is not welcome in working-class Protestant communities. And every "shared" housing scheme collapses before Protestant paramilitary intimidation. But paradoxically their older relatives still recall positively the shared experience of those "golden" years after the end of the war. Today tourists love visiting Belfast with its natural friendliness, quirky sense of humour and real pride of place. What they see less of is that sectarian sub-strata, which most know is there but are often unwilling to recognise in themselves or to accept that even those "other ones" are also part of that same Belfast shared sense of belonging.

Hearthlands: A Memoir of the White City Housing Estate in Belfast, book by Marianne Elliott.

"An alternative history of the North", review of Hearthlands.

The Long Road to Peace in Northern Ireland, edited by Marianne Elliott.