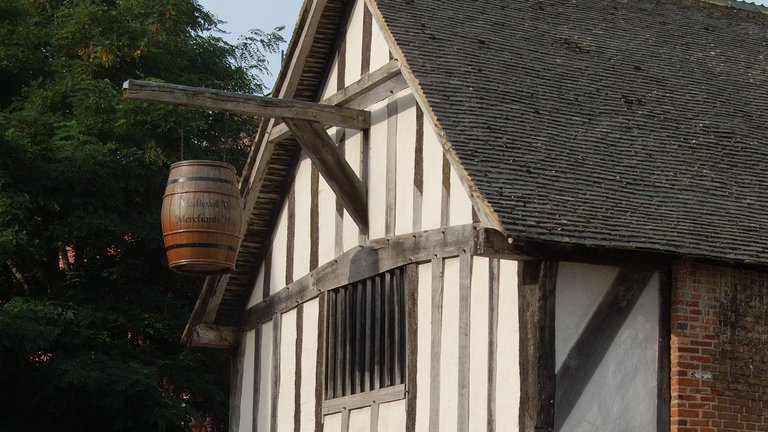 I am Chris Woolgar, and I am a Fellow of the British Academy. One of my interests is the history of the everyday and I am currently researching people’s goods in late medieval England, what academics call "material culture", but which we might understand as "people’s stuff", to reveal questions of mentalities, what goods meant to people. Medieval men and women tell us about this when goods change hands: one point at which this commonly happens is at death. So, in an attempt to get under the skin of ideas about goods, their qualities and connections, I am reading as many medieval wills as I can. We have about 45,000 from England between 1200 and 1500, too many for me to read – although 35,000 will say largely the same things – and I am therefore sampling.

Wills are not commonly looked at as a group, but when one does, it is possible to discover wider patterns. They do not record all an individual’s goods, but they do give us insights into many categories that survive rarely today, such as plate and textiles, and into longer-term interests in possessions – for testators were concerned with the future of their goods. They noted distinctive qualities, too, such as colour, or beauty; and they were interested in relationships, identifying friends and family as recipients and custodians of the goods. They are valuable, therefore, in establishing what is referred to as "the social life of things".

In 1290, King Edward I was granted a tax on moveable goods. In the countryside, exempt from taxation among the goods of knights, those of gentle status and their wives, were many items that defined the elite way of life: arms and armour, riding horses, jewels, clothing, along with gold and silver vessels, and even those of brass. Initially nothing was exempt in towns and cities but, in February 1291, it was agreed to exempt certain goods – an ensemble of belongings more restricted than those in the countryside. A merchant was to be allowed a suit of clothing and one for his wife, a bed for both of them, a ring and clasp of gold or silver, a silk belt that was used every day, and the cup of silver or a mazer (a cup typically of cedar or maple, with precious metal decoration and fixings) from which they themselves drank. How a merchant might see this ensemble of goods is therefore of great interest.

If we look at the wills of merchants and townspeople, it is rarely the goods that they traded that feature; but those exempt from taxation are prominent. Let’s consider two of these categories, the merchant’s belt and his personal drinking cup. Belts were worn by both men and women, and some were prestigious items. We also need to consider whether by a belt was meant simply the strap, as belt fittings indicate there were significant items hanging from them. The rather testy will of John Sheppey, Bishop of Rochester, from September 1360, deplored the custom among chamberlains who looked after a lord’s clothes, claiming on his death his belt and everything that hung from it – knives, purses, and also everything that was in the purse.

The wills from 14th-and-15th-century Southampton show the ubiquity of belts in merchant households: 14 documents mention them. One left by Isabella Ayleward in July 1470 to her sister, Alice, had ostrich feathers as silver gilt decoration. This particular heraldic, or heraldic-style, decoration linked to the household of the Prince of Wales. Where the wills mention the type of textile, the belt was invariably silk, although it is just possible some were of leather. Testators were keen to delineate the fittings too, and this gives us a sense of the prestige of these items. When a belt was described as silver or silver gilt, reference was made to the belt’s fixings rather than the colour of the whole, as some descriptions mention other colours, such as the silver belt with a blue body that Alice Nycoll left to her servant in 1424. There are links to close family too. In April 1455, Margaret Rider left her granddaughter Elizabeth her best belt of silver gilt; her daughter Agnes was to have a similar belt; and another daughter was to have the third best. Beyond its use as a functional and prestigious object, these transfers were intended to carry personal connection and memory.

Our second group of goods are cups and mazers, and there were many in merchant households. We can sense the outrage of the townspeople of Stamford, in Lincolnshire, in 1275, when the town’s sub-bailiffs, as a way of enforcing payments, seized brass pots standing over the fire, tipping out from them the vegetables and meat that were cooking in them and carrying them away; and when they could not take brass pots they took the mazers set on the tables of the same townspeople – that is, these were prestigious drinking vessels displayed in their halls.

In 14th-and-15th-century Southampton, special cups were prominent among the goods of merchants. John Polymond made his will in November 1393, leaving his wife Joan an ostrich-egg cup, called whytgrypesey – a white griffin’s egg – along with a silver gilt cup with a cover for sweet wine, a silver drinking bowl and a mazer. In November 1487, John Ludlowe the elder made a bequest of a standing drinking bowl, called "Christmas". Goods with names typically had special significance and we can imagine the occasions on which they might be used. There were further items: two silver pots (typically for containing wine and water), decorated with the arms of Walter Fetiplace, a leading merchant of the town and a relation. Ludlowe placed these items at the centre of an attempt to create, in law, a group of heirlooms that would descend inalienably from male heir to male heir. The goods were bequeathed to his son John. But the bequest was not a straightforward one: John was only to have the Christmas cup if he behaved well towards his mother, Christina – otherwise Christina was to have it for her lifetime. The most prestigious of goods, therefore, the Christmas cup, carried with it an implication of worthiness and honourable behaviour: prestige was not simply inherited, it had to be merited too. Families knew where these items had come from: there were links here that they wished to have known. The Ludlowe family wanted to perpetuate in this ensemble of goods the link to prominent merchants of the town.

There is a revealing paradox at the centre of our evidence: wills are about assuring the future of goods, but they are made when the direct use of the goods by the testator is coming to its end; they offer the chance to establish links and new connections, or to perpetuate others – that is, they give meaning to goods. They are closely linked to acts of memory and memorial culture but also to other important elements of medieval life – to connection; to status and standing; to notions of what goods a merchant and his family should have; and also to appropriateness – what it is fitting to give particular people and institutions. There may be no such thing as a free gift: reciprocal obligation is common in gift-giving between living people. Medieval gifts of goods that maintained connections beyond the grave were not innocent of reciprocity either.

The medieval senses were transmitters as much as receivers, article for Aeon by Chris Woolgar.