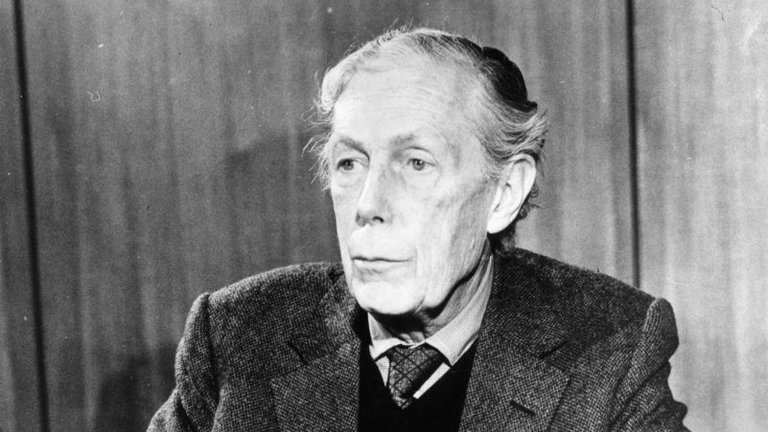 I'm David Cannadine, President of the British Academy, the national academy for the humanities and social sciences in the United Kingdom. I want, in the next few minutes, to explore one of the most remarkable episodes in the British Academy's history.

Forty years ago, to this very month, in July 1980, there took place the most famous, or infamous, annual general meeting in the Academy's history. It was the most well-attended such gathering there has ever been, and it received an unprecedented amount of public notice and media attention. And all of this because of one uniquely controversial item of business on the agenda: the proposal that Anthony Blunt, the renowned art historian, should be expelled from the fellowship because he had been unmasked as a soviet spy by the Prime Minister, Margaret Thatcher, the previous November.

It was a matter on which the fellowship was seriously divided

Should Blunt be expelled because his treason and treachery meant he was no longer a fit and proper person to be a Fellow of a great national institution, established by royal charter and funded by the British government? Or should he be allowed to remain a Fellow, since the Academy's prime concern was with scholarly excellence rather than political affiliation and activity? Blunt was undoubtedly a distinguished scholar.

From one perspective, this may seem a petty story of academic rivalries, professional jealousies and personal antagonisms. Yet from another, it's a story of highly educated and thoughtful men – though not many women – struggling with issues of profound and abiding significance: the relationship between personal conduct and political beliefs; the duties owed to friendship and conscience; the obligations due to king and queen and country; and the role, purpose and function of the learned academy in the life of a nation.

Anthony Blunt had been elected a Fellow of the British Academy in 1950, on the basis of his outstanding work as an art historian. He'd been educated at Marlborough and Trinity College, Cambridge, where he was elected a Fellow on the strength of the dissertation he completed on artistic theory in France and Italy during the Renaissance. This was published in revised form in 1940 and, soon after the Second World War ended, Blunt was appointed surveyor of the King's Pictures and also director of the Courtauld Institute Of Art, where he was a brilliant teacher, supervising such later luminaries as Nicholas Sirota and Neil McGregor. At Windsor Castle and Buckingham Palace , Blunt professionalised the care of the royal collection, and oversaw the opening of The Queen's Gallery in 1962. While at the Courtauld, he did more than anyone to establish art history as a serious academic discipline in Britain’s post-war universities. He also continued to write, research and curate. He produced a masterly survey of art and architecture in early modern France, staged a brilliant exhibition on Poussin at the Louvre in 1960 and seven years later he published his path-breaking book on the same artist.

In every sense this was a high-flying academic career. Blunt sat on virtually every influential national art committee and lectured widely in Europe and America. He was made a member of the French Legion of honour for his work on Poussin and Queen Elizabeth II dubbed him a Knight Commander of the Royal Victorian Order, which was in her personal gift. He was awarded a string of honorary degrees, elected to an honoree fellowship at Trinity College Cambridge, and was even spoken of as a potential President of the British Academy itself. So when he retired from his surveyorship of the Queen's pictures in 1972 and from the Courtauld two years later, he did so full of years and full of honours as well.

But this was far from being the whole of the story, for since his undergraduate days in the 1930s, Blunt had been living a double life as a gay man. He learned the arts of concealment, since homosexual acts at that time were illegal, and his election to the Apostles – Cambridge University's secret and most exclusive society – may have increased his liking for dissimulation. Under the influence of his wayward friend Guy Burgess, Blunt embraced communism in the belief that it was the only way of fighting fascism. And on the outbreak of the Second World War in 1939, he was recruited to MI5. But he was also working for the Russians and by the time the war ended, Blunt had passed nearly 2,000 confidential documents to his Soviet spy masters.

Once victory was won, Blunt left the secret service and returned to what soon became his glittering career as an art historian. But in 1951 he tipped off his friends Guy Burgess and Donald Maclean that they would soon be outed as spies, thereby abetting their sensational defection to Russia. Blunt himself was under suspicion by both the British and the American intelligence services for what already they knew or suspected about his wartime activities. Blunt eventually confessed in 1964, but in the aftermath of the recent defection of Kim Philby and the Profumo affair, the Conservative government was desperate to avoid another public scandal and Blunt drove a hard bargain, only admitting his guilt in exchange for a guarantee that he would be immune to prosecution in the British courts for the rest of his life.

But by the late 1970s, that hush-hush deal was no longer a secret, as it once had been. Some of Blunt’s students at the Courtauld had long suspected that he was living a double life. His spying activities were certainly known at the royal court in Westminster and Whitehall and among many academics. In November 1979, Andrew Boyle published a sensational book entitled The Climate of Treason: Five Who Spied for Russia, claiming that he knew the identity of the fourth man, Burgess, Maclean and Philby being numbers one to three. Soon after, Private Eye named Blunt as the fourth man and also outed him as gay, whereupon Margaret Thatcher formally unmasked Blunt as a spy on the floor of the House of Commons and he was immediately stripped of his royal knighthood.

Blunt was well educated and well connected, equally at ease in the groves of academia, the corridors of power and the palaces of royalty. He had been the beneficiary of a secret immunity deal which had all the marks of an establishment cover-up. In addition to having been exceptionally well treated by the country he had betrayed, Blunt was also gay. And while same-sex sex was no longer by then illegal, it was still regarded by many as being deviant, abnormal and perverted behaviour.

It was in this febrile atmosphere that Sir Kenneth Dover, the distinguished Hellenist, who was then also President of the British Academy, received a letter from the eminent Cambridge historian J. H. Plumb – another Fellow of the Academy – insisting that steps be taken to expel Blunt from the Fellowship. The matter was discussed at meetings of the Academy's council in the early months of 1980, before being taken to the annual general meeting in July, since under the Academy's statutes it was only the AGM which had the power to expel Fellows – something which it had never done before. The AGM declined to expel Blunt, as a result of which some Fellows resigned, because they thought he should have been thrown out. Several more Fellows, urged on by J. H. Plumb, notified Dover that unless Blunt resigned by the end of the year, they too would quit. And they made their opposition public, writing and talking to the newspapers.

Eventually, in August 1980, Blunt did resign, prompting several of his friends in the Academy to do the same – this time in protest that he had gone when they thought he should have stayed. There were more articles in the newspapers and highbrow journals and Kenneth Dover relinquished the Presidency of the Academy 12 months before his term would customarily have ended.

There's much more to be said both about Blunt's life in general and about the affair which convulsed the British Academy for most of 1980. Not just in fact, but in fiction too. There's a brilliant biography of Blunt by Miranda Carter, and Alan Bennett wrote a bravura piece entitled A Question of Attribution, portraying an imaginary encounter between Blunt and Queen Elizabeth II, discussing issues of fakes and cover-ups – ostensibly about art, but really about spying. Dare I also mention that the British Academy has just published many of its own documents concerning the Blunt affair, topped and tailed with an introduction and a conclusion written by me. In homage to Alan Bennett, the book is called A Question of Retribution, but I leave it to readers to decide on just what the answer to that question might be. I do hope that you will be one of them. Thank you so much.

Anthony Blunt: A Question of Retribution?, David Cannadine on Radio 4.

Messages in the bottle: inside the louche, liqueured-up world of the Cambridge Spies , Ferdinand Mount in Prospect.

The real-life spies of Tinker Tailor Soldier Spy, Neal Ascherson in the Guardian.

Lead image: One of a series of close-ups of Anthony Blunt, when he made his first public appearance since the sensational disclosure last week that he was a Russian spy. He was addressing a press conference at the Times newspaper offices, outlining his role in the spy scandal. © Bettmann via Getty Images.