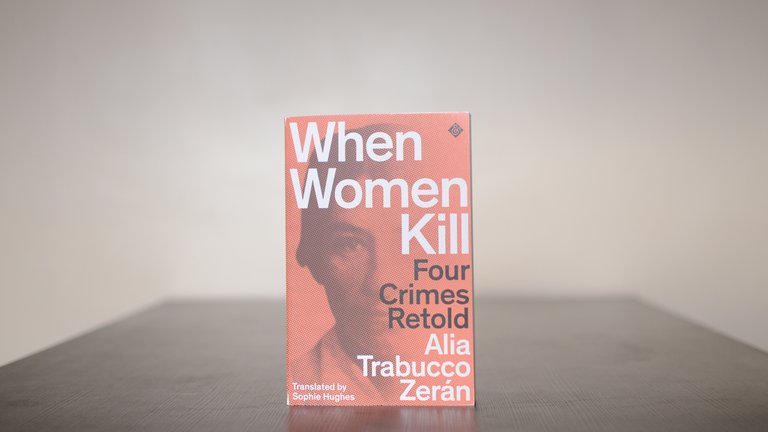 When Women Kill: Four Crimes Retold by the Chilean writer Alia Trabucco Zerán is today named the winner of the 10th British Academy Book Prize for Global Cultural Understanding. The announcement was made by Chair of the jury, Patrick Wright FBA, at a celebration at the British Academy.

Chosen from a shortlist of six works of non-fiction, When Women Kill: Four Crimes Retold forensically examines four homicides committed by everyday Chilean women over the course of the 20th century. Taking these four cases in Chile as her starting point, Alia Trabucco Zerán introduces a wholly original and globally significant feminist perspective to the study of women murderers. It is translated by Sophie Hughes, and is published in the UK by independent press, And Other Stories.

Alia Trabucco Zerán – whose debut novel The Remainder was shortlisted in 2019 for the Man Booker International Prize, and who originally trained as a lawyer – spent many years researching this outstanding work of creative non-fiction, expertly blending true crime writing with the art of the critical essay and investigative memoir. The result is a compelling narrative which not only explores the circumstances around the four killings ­­– so high-profile that they went on to inspire plays, poems and films – but also the reaction from the media and the judgement of a patriarchal society.

Alia Trabucco Zerán was awarded a Fulbright scholarship for her MFA in Creative Writing at New York University and holds a PhD in Spanish and Latin American Studies from University College London. The Remainder won the Best Unpublished Literary Work awarded by the Chilean Council for the Arts in 2014, and on publication was chosen by El País as one of its top 10 debuts of 2015. She was born in Santiago, Chile, in August 1983, and lives there today. When Women Kill is her second book.

“When Women Kill is a highly original and beautifully written work, which uncovers uncomfortable truths about a society and its attitudes to female homicides. This is a timely and important work that invites the reader to reconsider the relationship between gender and violence – not just in Chile but globally. Trabucco Zerán has applied her legal training to the creation of this outstanding book, reminding us that research takes many forms and is not only the preserve of the academic world.”

Professor Julia Black, President of the British Academy added: “On behalf of the British Academy, it is my honour to congratulate Alia Trabucco Zerán for bringing to our attention a story that will resonate universally, and for reminding us how excellent writing and exemplary research are an essential part of every compelling read.”

Alia Trabucco Zerán will receive £25,000 for winning the prize. Each of the shortlisted writers will receive £1,000 – a new addition this year.

When Women Kill: Four Crimes Retold, was chosen from a shortlist of six books that included: The Invention of Miracles: Language, Power, and Alexander Graham Bell's Quest to End Deafness by Katie Booth (Scribe UK); Aftermath: Life in the Fallout of the Third Reich by Harald Jähner (WH Allen/Ebury Publishing); Osebol: Voices from a Swedish Village by Marit Kapla (Allen Lane); Horizons: A Global History of Science by James Poskett (Viking) and Kingdom of Characters: A Tale of Language, Obsession and Genius in Modern China by Jing Tsu (Allen Lane).

The British Academy Book Prize, formerly known as the Nayef Al-Rodhan Prize, was established in 2013 to reward and celebrate the best works of non-fiction that demonstrate rigour and originality, and have contributed to public understanding of other world cultures and their interaction.

The winner in 2021 was Sujit Sivasundaram for Waves Across the South: A New History of Revolution and Empire.