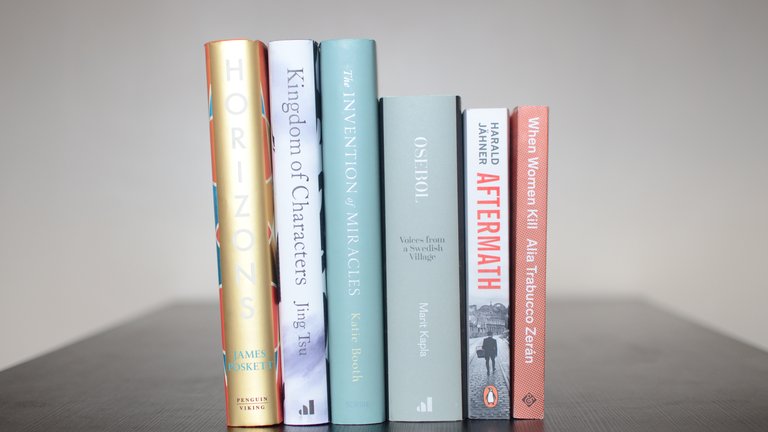 The international book prize, worth £25,000, rewards and celebrates the best works of non-fiction that have contributed to public understanding of world cultures and their interaction.

This year’s truly international shortlist introduces readers to six exceptional, meticulously researched books on a wide range of topics: from the lives of villagers in a remote Swedish community, to life in the ruins of a recovering post-war Germany; the Chinese language and its adaptation to an outside world dominated by alphabetic thinking; the stories of four women who have killed, as seen over a century in Chile; a radical retelling of the history of science; and a revelatory biography of Alexander Graham Bell, inventor of the telephone and of controversial methods that would enable deaf people to speak rather than sign.

The six books on the 2022 shortlist, alphabetically by author surname, are:

Marit Kapla, editor of a cultural magazine in Gothenburg, brings to life the stories of the 40 remaining residents of a remote village in Sweden in Osebol: Voices from a Swedish Village. Kapla’s engrossing debut book became an unexpected phenomenon in Sweden and is translated by Peter Graves.

In When Women Kill: Four Crimes Retold, the Chilean novelist Alia Trabucco Zerán – who was shortlisted in 2019 for the Man Booker International Prize – analyses four homicides carried out by Chilean women over the course of the 20th century. The result of many years of research, this captivating work of narrative non-fiction not only examines the circumstances around the four killings but the reactions from society, the media and the men in power. It is translated by Sophie Hughes.

Two books on the shortlist look at language and how we communicate. The Invention of Miracles: Language, Power, and Alexander Graham Bell's Quest to End Deafness by Katie Booth, who grew up in a mixed hearing / deaf family, is the result of more than a decade’s research. This compelling and revelatory biography of Alexander Graham Bell tells the dual stories of the invention of the telephone and how Bell became the enemy of the deaf community in his efforts to stamp out sign language in America. This is Booth’s first book.

In Kingdom of Characters: A Tale of Language, Obsession, and Genius in Modern China, Jing Tsu, a Professor of East Asian Languages and Literatures & Comparative Literature at Yale, combines meticulous research with a compelling narrative to tell the stories of the bold innovators who adapted the Chinese language to make it accessible to a globalized, digital world.

Completing the shortlist is Horizons: A Global History of Science in which James Poskett, Associate Professor in the History of Science and Technology at the University of Warwick, challenges the traditional Eurocentric narrative in a radical retelling of the history of science and celebrates scientists from Africa, America, Asia and the Pacific and the parts they played in this story. This is his first book for a general readership.

Two of the books on the shortlist come from independent publishers – Scribe UK and And Other Stories. Penguin Random House has four titles from three imprints (Allen Lane, Viking, and WH Allen/Ebury Publishing).

“This is the 10th year of the British Academy Book Prize, which now attracts many entries from across the humanities and social sciences, and includes books by journalists and independent writers as well as academics. Themes vary greatly and each book on this year’s shortlist greatly impressed the judges, not only for casting new and often quite unexpected light on an issue of global currency and importance, but its imaginative way of combining original research with a style and approach that is accessible to the non-specialist reader.”

The six 2022 shortlisted writers will be brought together for a special event in October. Details to follow.

The shortlisted writers will also be in conversation with Professor Rana Mitter FBA in a special edition of Free Thinking on BBC Radio 3 on Tuesday 18 October and will be available worldwide on the BBC Arts & Ideas podcast.

The winner of the £25,000 prize will be announced at an award ceremony on Wednesday 26 October.

The winner in 2021 was Sujit Sivasundaram for Waves Across the South: A New History of Revolution and Empire. Other previous winners include Hazel V. Carby, Toby Green, Kapka Kassabova, Neil MacGregor and Karen Armstrong.