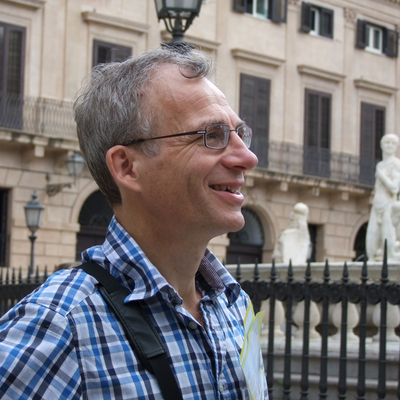 Robin Osborne has been Professor of Ancient History in the University of Cambridge since 2001. Educated at Colchester RGS and King's Cambridge (MA, PhD), he held a Junior Research Fellowship at King's before moving to a five-year Fellowship at Magdalen College, Oxford in 1986 and then to a CUF University Lecturership at Corpus Christi College Oxford in 1989 (titular Professor, 1996).

Robin Osborne's work ranges widely over Greek history, art history, and archaeology. Most of his work concerns itself with historical questions for which material evidence is relevant, or with material evidence that raises historical issues, and he has explored some of the problems created by relying on only one sort of evidence in his History Written on the Classical Greek Body (2011). Robin Osborne is a past President of the Society for the Promotion of Hellenic Studies and of the Classical Association, was Chair of the Classics Sub-Panel in REF 2014 and has been Chair of the Council of University Classical Departments. He was Senior Tutor at King's College Cambridge from 2009-2013.

The History Written on the Classical Greek Body

Robin Osborne - Published in 1996 by Routledge

Classical Landscape with Figures: The Ancient Greek City and its Countryside