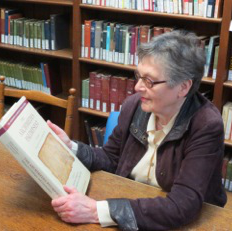 Pat Easterling (née Fairfax) read Classics at Newnham College Cambridge 1952-1955, and worked on Greek manuscripts as a graduate student before moving to Manchester as an Assistant Lecturer from 1957-1958. She held posts at Newnham and in the Cambridge Classical Faculty until 1987, when she was appointed Professor of Greek at University College London. In 1994, she returned to Cambridge as Regius Professor of Greek and Professorial Fellow at Newnham, retiring in 2001.

The main focus of her research is Greek literature, particularly tragedy, its performance and reception in antiquity and in later cultures; and the study of manuscripts and their history continues to be a major interest. Since the early 1970s, she has been a general editor of Cambridge Greek and Latin Classics, a commentary series now reaching its hundredth publication.

She is an Honorary Fellow of Newnham, University College London, and the Institute of Classical Studies, and has been honoured by the Universities of Athens, Bristol, Royal Holloway, Uppsala and Ioannina. She was elected associé étranger de l'Académie des Inscriptions et Belles-Lettres at Institut de France in 2013 and Honorary Member of the Hungarian Academy of Sciences.

Greek and Roman actors: aspects of an ancient profession

The Cambridge companion to Greek tragedy

The Cambridge history of classical literature, vol I: Greek literature