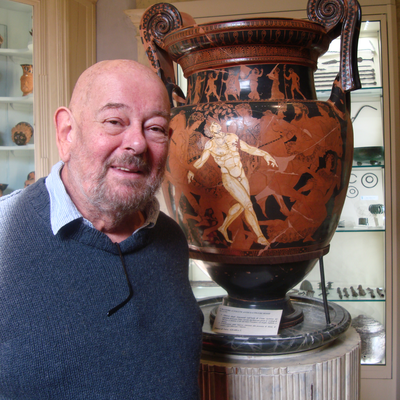 Oliver Taplin retired in September 2008 from being a Professor of Classics at Oxford University and Tutorial Fellow at Magdalen College, Oxford. His first book was The Stagecraft of Aeschylus (Oxford University Press, 1977), and his most recent single-authored book is Pots and Plays (Getty Publications, 2007). He co-founded the Archive of Performances of Greek and Roman Drama in 1996. He was awarded an Honorary Doctorate by the University of Athens in 2013. The leading recurrent theme of his work has been the reception of poetry and drama through performance and material culture, in both ancient and modern times. Recently he has been translating plays with the aim of including the kind of dynamic and colour which will be effective in live performance with verse and music. His Medea was published (Chicago University Press, 2013) and Sophocles Oedipus the King and other tragedies (Oxford World Classics, 2016). Throughout his career he has tried to keep one foot outside the academy, especially in broadcasting and theatre, both within and beyond the UK. Productions that he has collaborated with include the Ã”resteia (1981-2, dir. Peter Hall), The Thebans (1992, dir. Adrian Noble), the Ã”resteia (1999-2000, dir. Katie Mitchell) and Swallow Song (2004, 2006 dir, Lydia Koniordou).

University of Oxford Professor Emeritus of Classical Languages and Literature

University of Oxford Reader in Greek Literature; Professor of Classical Languages and Literature

Homeric soundings, the shaping of the Iliad

Oliver Taplin - Published in 1978 by University of California Press