Specialist in anthropology, with a broadly political and economic focus 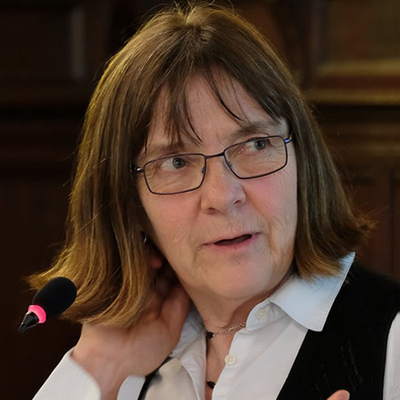 Deborah James is a specialist in the anthropology of South and Southern Africa, where she has done fieldwork in Mpumalanga and Limpopo Provinces and their urban hinterland, the Witwatersrand. She has recently begun research at some sites in the UK. Her work is broadly political and economic in focus. Her research in the anthropology of economy explores, in South Africa, how people’s access to credit is bound up with identity, status, and aspirations of upward mobility and, in the UK, how debt advisers/intermediaries seek novel resource flows, invent interventions, and create new spaces of justice. Professor James recently completed work on an ESRC-funded project entitled ‘An ethnography of advice: between market, society and the declining welfare state’.

Her book Money from Nothing: Indebtedness and Aspiration in South Africa (Stanford University Press, 2015) explores the dynamics surrounding South Africa's national project of financial inclusion – dubbed "banking the unbanked" – which aimed to extend credit to black South Africans. It shows the varied ways in which access to credit by people in these newly-included sectors of society is bound up with identity and status-making, and draws out the precarious nature of both the aspirations of upward mobility and the economic relations of debt which sustain the newly indebted, revealing the shadowy side of indebtedness and its potential both to produce new forms of oppression and disenfranchisement in place of older ones, while also helping realize projects of upliftment.

Professor James’s previous book Gaining Ground? "Rights" and "Property" in South African land reform (Routledge, 2007) shows how mutually constitutive discourses about the ownership, use, and governance of land reveal contradictory understandings of custom, community and citizenship. Her interest in the contestations between state- and market-driven ideologies also encompasses issues relating to reproductive health and HIV-AIDS. Her earlier research focused on ethnicity, migration, and musical performance: in Songs of the Women Migrants (Edinburgh, 1999) Professor James explored how women migrants from the Northern Province defined themselves as ethnic subjects through musical performance.

Professor James is also interested in comparative insights into the state, law, civil society, and religion: both in postcolonial settings and in the UK, and co-edited a volume called An Apartheid of Souls, which brought together scholars of Indonesia and South Africa.

University of the Witwatersrand Senior Lecturer in Social Anthropology

University of the Witwatersrand Lecturer in Social Anthropology

University of the Witwatersrand Junior Lecturer in Social Anthropology

University of the Witwatersrand Assistant Lecturer in Social Anthropology

Money from Nothing: Indebtedness and Aspiration in South Africa

Deborah James - Published in 2007 by Routledge

Songs of the Women Migrants: Performance and Identity in South Africa

Deborah James and Samuel Kirwan - Published in 2019 by Social Anthropology

Deductions and counter-deductions in South Africa

Deborah James - Published in 2017 by Hau

‘Deeper into a hole’: borrowing and lending in South Africa

Deborah James - Published in 2012 by Africa

The return of the broker: consensus, hierarchy and choice in South African land reform

Hill of thorns: custom, knowledge and the reclaiming of a lost land in the new South Africa

Deborah James - Published in 2000 by Development and Change

Bagagešu/those of my home: migrancy, gender and ethnicity in the Northern Province, South Africa