Syntactic theory; grammatical variation across and within languages; interactions between syntax and other areas of grammar, including morphology, semantics, and sociolinguistics; syntax in cognitive science 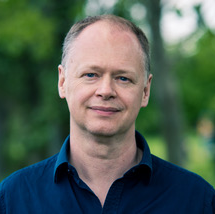 David Adger’s research ranges across linguistic topics but is connected by a concern with syntax: understanding the basic organising principles behind the way that languages build meaning through structure. His work connects syntax to issues in sociolinguistics and cognitive science, as well as contributing to the basic question of what kinds of structures are possible in human languages and why. His most recent book, Language Unlimited, tried to present some of the arguments and results from that field in an accessible way. He was President of the Linguistics association of Great Britain from 2015 to 2020, was co-editor in chief of the journal Syntax from 2007 to 2013, and founded and is series co-editor of Oxford Studies in Theoretical Linguistics. He was one of Queen Mary’s LGBT role models in 2018, while he was Head of the School of Languages, Linguistics and Film there.

Professor David Adger FBA explains what syntax as an area of study is, why he finds it important and fascinating, and why it is central to what it means to be human.

University of York Lecturer in Linguistics

The power of words

What’s the shape of a word? How do you save a dying language? How is studying languages a science anyway? David Adger tackles these questions.

Talking Is Throwing Fictional Worlds at One Another

A linguist exposes the inner truths about language.

David Adger talks about how to build a language from scratch, and how thinking about this can provide us with insights into how real languages work:

A Syntax of Substance

Part of 'Cambridge Studies in Linguistics'

Peripheries: Syntactic Edges and Their Effects